Way Back When with Triggs | Ep 8 Greg Hill UPDATED

May 31, 2012Paul TriggerWay Back When with Triggs
Over the past few decades Trigger Brothers has accumulated a large collection of old school photo’s of Paul, Phil and friends from back when it all began! So we decided it’s time we get Paul to write up a short story about some of these classic moments in time… from local sessions and state titles to random road trips across the country.
John Doe, Company Inc.

The below shot was taken in our backyard at Bonbeach where we made our first 50 boards before moving to our original Chelsea store on the Nepean Hwy. The big solid handsome bloke was our footy mate Greg, he won a best and fairest in the M.P.F.L before heading up to the Melbourne footy club to play for their U19’s and reserves. The following year another little mate of ours, Leigh Matthews, who was also from Chelsea F.C. won the same award. Three players from our U15’s and U17’s premiership teams ended up playing AFL, the other two being Kelvin Matthews and Greg’s next door best mate, Malcolm Owens. 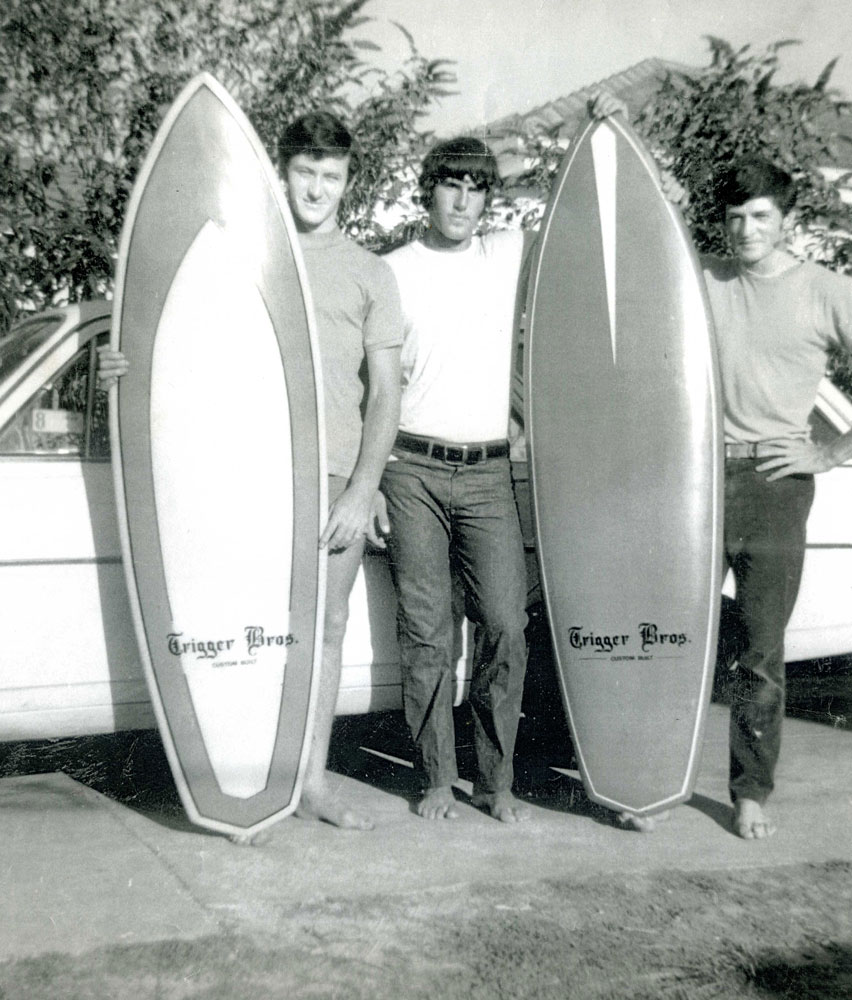 Living just around the corner, Greg took an interest in our boards and his sign writing trade came in handy when it came time to place our name on the boards. At this stage we new nothing of tissue decals that we introduced after the 1st dozen surfboards. The old english Trigger Bros came about because Dad and his twin brother Harold used it in their grocery business at Queenscliff, where it was displayed in huge letters on the shop wall and also stamped on their invoice books. So in a way it was a natural hand me down from one generation to the next.

When phil and I had finished a board Greg would either paint or use lettroset figures to brand it. Before long our imaginations got a little carried away! We decided the very next surfboard should additionally be called the 3rd Dimension, with the only problem being that only one was made (currently we make hundreds of a particular model, thousands in the case of the stubby), that board was followed up by a single unit 4th dimension and yes the one and only 5th dimension was also created before we took a reality check on where we were heading.

The old english Trigger Bros came about because Dad and his twin brother Harold used it in their grocery business at Queenscliff, where it was displayed in huge letters on the shop wall and also stamped on their invoice books.

Greg’s reward came in the form of his 1st ever new board where his artistic flair helped produce a 7ft black pigment pintail, decorated with multiple pinlines in gold and silver foil that would put a big Mac Truck to shame. Even in 1970 we were sceptical of using black, just as we are today. This magnificent surfboard was placed in front of a heater by Greg and he was almost crying when he showed us the bubbled version.

All waxed up Greg and the Bros paddled out at Lorne to Baptise his new board. Wayne Lynch and his lookalike Moose, were shredding the waveocular landscape. At this time most aussie surfers regarded Lynchy a shoe in for the World Titles. Paddling out Phil and I witnessed Greg’s drop-in on the man at his home break, but to his credit not a word in anger was spoken. The Fish mesmerised everyone with a blinding re-entry up behind Greg’s head and a landing on the other side. For the Bros there’s only ever really been two surfing freaks, Kelly Slater and Wayne “the Fish” Lynch.

We were contacted by a surfer now living in Perth looking to offload an old Trigger Bros. surfboard he owned. After seeing the picture he sent through we realised it was the surfboard pictured in this article. Here’s the correspondence we received…

My son tells me that the surfboard is being sent over soon, so I will try and give a bit of a history of what it went through with me.

I bought the board second hand in either late 1971 or early 1972, I can’t remember exactly, but I think it must have been more 1971. I used to ride a 9 foot 4 inch Niel Barwise plank, which was a lot of fun but not real easy to carry down to beaches (it weighed a ton!), so I decided to get a more nimble and lighter board.

I remember vividly the first time I took it into the water, it was at Ocean Grove beach, I hopped on once past the shallows and promptly fell off! I couldn’t even sit in it, after the big board it was so very skittish (but heaps lighter ☺). It took me quite a while to be able to sit on it without falling off. Anyway, needless to say I did manage to sit on it and eventually ride it. My friend Roger Pearson and myself used to go down to the beach at Ocean grove every Friday night and sleep in the car in the tea tree just off the beach. We would get up early Saturday morning and go looking for surf, if the swell was good at Ocean Grove we would just stay there, although we did go around to 13th beach if it was only so so. Our favourite place was Point Addis (spelling?) Just down the road from Bells, we did go to Bells occasionally, but the surfers there were very good and we didn’t feel like we were up to their standards (a bit silly now I think of it,). I surfed all the way down the west coast with Roger including Lorne, Anglesea (paddling out to the reef offshore) and lots of other places I can’t remember.

We also surfed Phillip Island beaches and down through 80 mile beach etc through Gippsland. We were going to take 12 months off work to surf the country, but Roger met a girl, and as you might imagine that got put to one side. We stopped surfing together shortly after that in around 1974, girls, jobs growing up, etc sort of got in the way and we just drifted apart.

As you can see the board has quite a few dings in it, all repairs done inexpertly by me. I once fell off with Roger surfing right next to me and the board flew up and got him in the head, it split his forehead open and he bled a lot! We were about 300 yards off shore at the time and I remember starting to worry about sharks as we went in, luckily none came. I tried a leg rope on it for a little while (hence the hole in the fin) but didn’t like it so I never wore one after a couple of tries. I tried not to fall off as the board would happily follow the wave to shore when I wasn’t on it.

I kept the board all these years, initially as I was going to ride it again one day, then when I realised that was not going to happen, because it had so many good and happy memories for me. Then I was saving it for one of my kids to use, they weren’t interested, so next it was for the grandkids. They aren’t interested either so once I knew you would like it it was an easy decision to send it back to its original owner. Hopefully I will come and see it when I am in Victoria again.

As a footnote, I moved to W.A. 30 years ago and discovered how good the surf is over here, I wish I had known about it when I was madly surfing. I can only recommend the place if anyone wants to come over and surf some of the breaks over here.