Way Back When with Triggs | Ep 20 The Point

December 12, 2013Paul TriggerWay Back When with Triggs 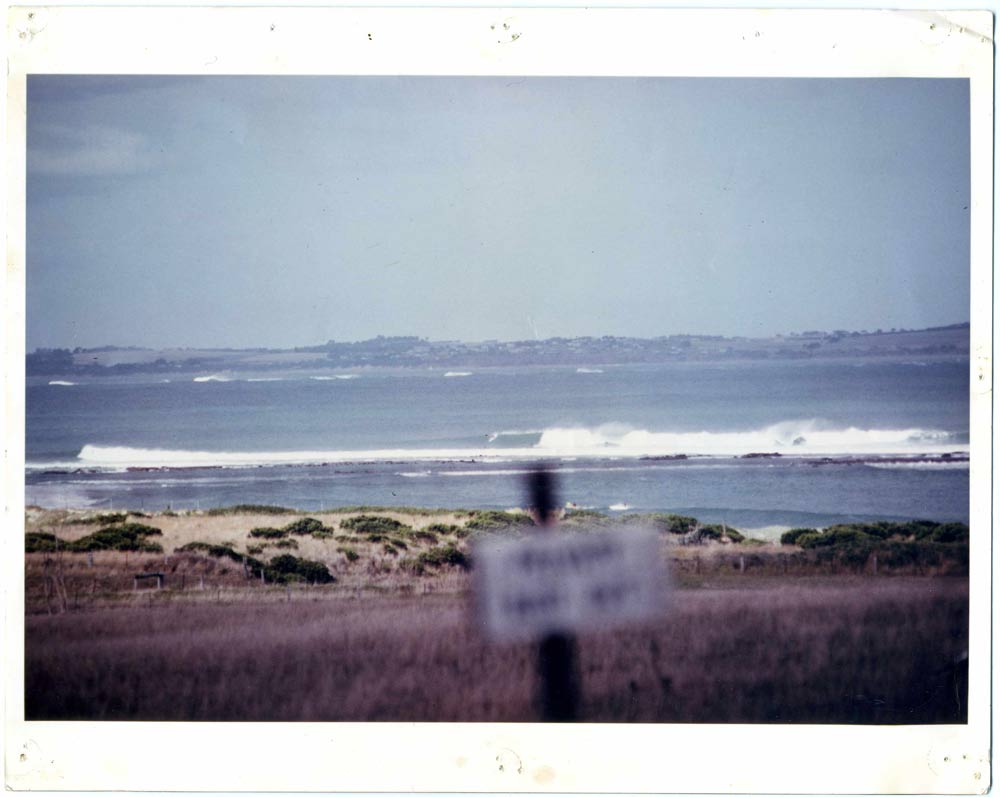 This photo taken by Peter Wilkinson in the early 70’s is shot from above the reef looking through to the point on a big offshore day. Unfortunately nothing much has changed surf wise, as Pete’s caption on the back reads “One of the only good winter swells this year”. We know its early 70’s because at this stage there was no housing on the lower reaches of the Pt Leo farm and Shoreham estate. Today there is no visible farmland left when you’re in the water looking back up the hill, just housing and heaps of trees.

Taking a closer look 2 surfers have just passed over the lip at 1 st reef.  I’m thinking “mumbles” and young Johnny Clatworthy, two exciting goofies who used to tear the reef to shreds and run the barrel onto dry sand. Ask any of the old timers and they will tell you the reef doesn’t break anything like it used to for consistency and shape. We think the reason for this is the direct impact of the housing estate whereby the creek rarely ever overflows to deposit sand and form a shallow left and right bank. The rainfall is soaked up by all the greenies (trees and people). Pines river mouth is a good example this year of the flow on effects when our waterways broach the ocean.

Rupert White whose grandfather Jeff Rawes owned Pt Leo Farm (all the land from Leo through to Shoreham) told me recently how he, his mum and Richard Collier would sometimes dig out the bank so the creek could flow through to the sea and build an A frame on top of those few scattered rocks at the reef.

Three surfers are attempting to ride the wave off the point ,one way to deep and then there’s Ted Bainbridge bottom turning and setting up only to see Bazza Burns dropping in on the shoulder( not a bad tactic as many surfers would get caught behind the white water and eaten up). To most regulars at Point Leo the opinion is that it doesn’t break as good as in the 70’s and early 80’s. Perhaps that’s why P.S.C. no longer hold comp’s in the bay, preferring to put their Cadets, Juniors and Women out in playful 8ft rip bowls. How quick they have been to forget that the best surfer the club has ever produced by a mile One Garry Taylor cut his teeth and honed his skills under Wilkos coaching at Treloars and 1st reef.
Brother Phil now calls the suicide area Hastings on a big swell as the take off has shifted so far across in that direction. On the high tides a large group led by Cal Nicholson and Wade Cochrane are riding at Sometimes, while John Jolly is dropping in at Idiots and there will be a few trying their luck at Mystery Lefts.
It has been suggested the muscle farm has been pivotal to the changes we observe in Western Port or maybe its just nature taking its course. 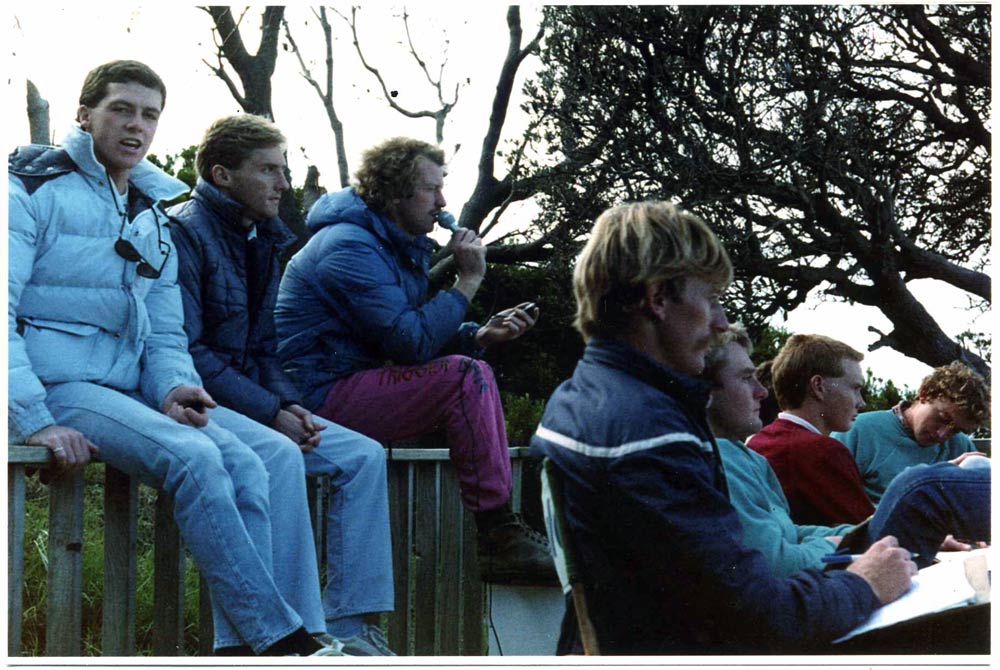 Linking in with the landscape shot of the point on a big day is this eighties close up view of the judging panel for Peninsula Boardriders Club on a rare visit to Westernport bay.

Wilko was not only Head judge for the club but also, the Victorian A.S.A Head Judge and carried that position to a World Junior Titles in California. His trackies were a big seller back in the day though the colour is one preferred by the ladies.
On Pete’s right is Cameron Mole a seasoned surfer and still hanging out at Gunna on a good day.

A very young Kane Tankard(Leo Local) on the top row is still a very good surfer on short boards, while in his younger days was more noted for his Mal surfing. He made finals in both 8ft and 9ft divisions at the Australian Titles. Kane and his dad Gus started manufacturing surfboard blanks (the 1st Surf company in Vic to do so for some 40 years) under the name Tank’s Blanks and Kane has carried off his father’s dream with their foam shipped all over Australia.

Upon being ushered into our quarters at least 2 to 3 rats scarpered thru the broken floorboards. It was all too much for Shane so we waited till almost midnight, sneaked out of the house and once 400 meters down the road we were screaming for joy like madmen recently released. As luck would have it we managed to find a motel still open.

The following morning we set out hitchhiking to the Kummra patch, a left hander and one of N.Z.s finest waves. A long haired surfie in a Kombi pulls over and offers a ride. After a few k’s down the track to our destination its obvious he has marijuana buds sprouting out of his ears. The Cheech and Chong characters were without a doubt based on this man. We declined on all the drugs we were offered and arrived at a feeble 1 to 2 ft beach break below a lighthouse. Because he was so stoned he wanted to stay in the van, smoke a joint and keep a safe eye on all our gear while we caught a few waves. How could we have been so lucky!
Sitting beside Shane is Phil Taylor (G.Ts older brother) another of the Peninsula’s hot Goofy footers and a very popular guy. On this particular day with the strong swell and a Nor’ Westa Phil snapped his leg rope in a pre comp surf, swam in only to find his new ocka had been swept out and was heading towards Somers. Brother Phil and J.T. went in search of a tinny as three or four of us tracked its path from the lookout. After only a drift of some 400 metres it vanished completely from view even though we were in an elevated position. Phil Taylors new stick was never recovered.

Leigh “REDS” McClure was a fantastic surfer who unfortunately had to face the unbeatable GT in every club and state comp. His signature move was the floater and I doubt there was a better exponent of this manoeuvre in Victoria. For a short period of time he partnered Ian Weir in a surf shop on Nepean Hwy Frankston.

Matthew “Ando” Anderson now of Phillip Island but once a true blue PSC clubman and all round goodguy. Not your greatest club competitor but never scared to have a crack and a real team player.