Way Back When With Triggs | Ep 16 | Ian Porty Portingale

February 25, 2013Paul TriggerWay Back When with Triggs 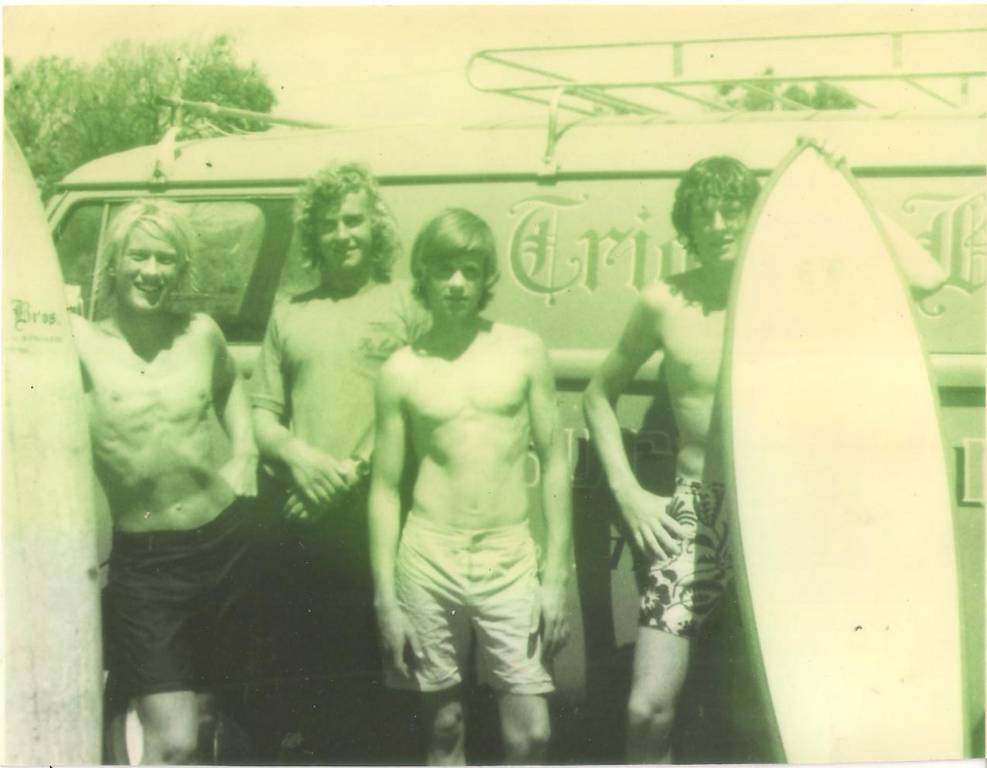 Phil and I were very lucky when you think of the surfing talent that developed at Bonbeach. Porty and Little Ian lived over their back fences and both were only half a km from our place. Not forgetting Robbie McCartney who became one of the best kneeboarders in Vic for over 10 years. Porty and Robbie were best mates, both excellent swimmers who honed there competitive water skills at the Bonbeach L.S.C.

It was there that at the age of 10 or 11 Ian’s parents gave him a 9’6″ surfboard for Christmas, during the summer of ’65, and learnt the fundamentals of boardriding at around 11 years of age. Not too many other kids ever surfed the bay before school but I remember Porty and Robbie doing so on numerous occasions such was there enthusiasm. Ian’s dad Maurie was not only Mayor but also President of the life saving club and along with his wife Floss lived a very healthy outdoor lifestyle. By 1969 Ian was a regular at both our little back yard factory and joined us in the Kombi for surf trips to near and far. He became our very 1st team rider and in 1970 kick started a very successful comp career with a 4th at the Vic schoolboys as a 15 yo. 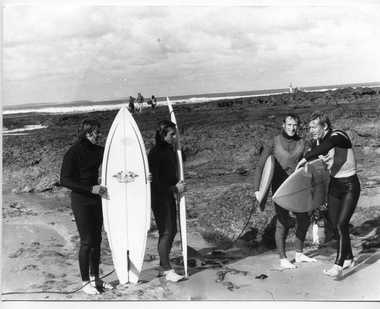 Porty developed a very powerful style highlighted by carving bottom turns and solid tube rides and equally as important he was a natural competitor who made the right decisions under pressure. Confidence was a key factor and Peter Baker recalls when surfing out in front of the lifesaving club at Bonbeach the 14 yo Porty spotted a girl walking the beach, he bragged about taking her out and to everyone’s amazement paddled in and brazenly asked the young lady for a date. His gob smacked mates were dumb founded when he rejoined them to celebrate his success. 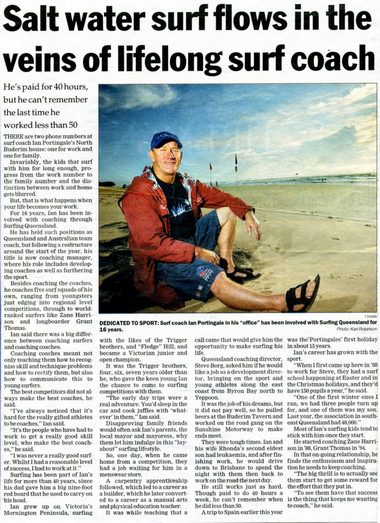 A string of schoolboy victories where he often won a surfboard donated by Mordy Surf led into an outstanding series of results in ’73. That year he won The Vic Junior titles, The King of Sunderland Bay on Phillip Island, 2nd at the Easter Bells Juniors pitted against some strong talent from interstate and to rub salt into the wounds of sponsor Mordy Surf’s Lindsay Mudge he won another brand new Surfboard in the Pt Leo 500 juniors. At the presentation Lindsay made mention of Ian’s growing surfboard collection courtesy of Mordy and everyone could tell he was pissed off. Porty’s loyalty saw him sell all these brand new ocka’s. 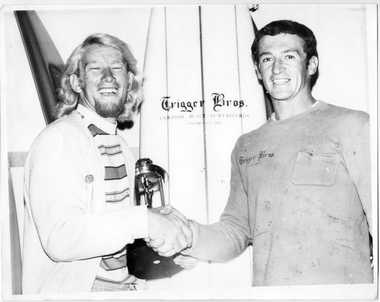 Leading into ’73 Phil and I made the move to establish ourselves on the Hwy at Chelsea and a few technical details that arose relative to the zoning were sorted out by the council headed up by the Mayor Maurie Portingale. The thank you came in the form of a truly Magic board that helped put Ian on the winning podium time after time. It was a white pigmented board with some clean black pin lines on the bottom, a 6ft rounded pin that he kept for ages(see pic) .Sadly this beautiful surfboard was reversed over by Jack Trigger’s car when it was left lying in the driveway at Haldane St. 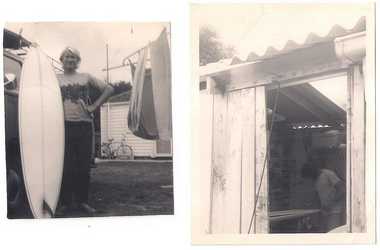 Whilst mentioning cars, at 18 Ian’s first was a well kept brown EH Holden sedan passed on from his father, similarly our brother Peter inherited dads EH Holden wagon, same paint job and also in mint condition. The 1974 Vic Titles at Bells was a very close affair with Porty snatching victory in the dying seconds. I had offered him what I thought would be the last ridden wave but he knocked it back and his fine line judgment placed him on the biggest wave of the day(8ft) as the hooter blasted. A couple of magnificent bottom turns, two barrels through the bowl and he was crowned Vic Open Champ ’74 with Trigg’s 2nd and Phil placing 6th. Phil had received 20 stitches in the head after an accident in the shorebreak during the repercharge and was told by the Doctor not to surf in the final. Our Team was firing as we also had Alan Atkins in 4th place, Robbie Mac 2nd in the kneeboards and Ian Cochrane 2nd in the Juniors, all regular finalist’s in most State rounds. 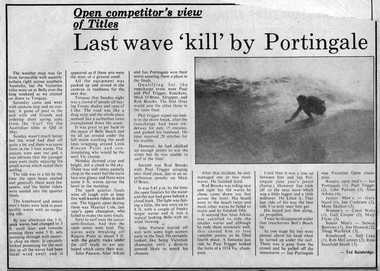 Porty made the Vic Open final again in 1975 and because of the previous years successful preparation told us on the Sat arvo that he was once again going to follow the same steps.

Porty failed in his back to back attempt.

1976 Porty was once again a dominant force initially finishing runner up, but later in controversial circumstances being deemed Vic Champ after Maurice Cole was stripped of the title. Invites to the inaugural Coke and Stubbies event plus the PaBendall in Qld came his way. From ’71 to ’78 he represented Victoria at the National titles with 78 being another stellar year. 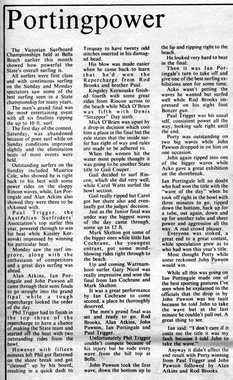 Returning from a trip to Hawaii he was just edged out via a count back by Wayne Lynch at the Alan Oke Memorial contest the final of which was held in perfect 6 to 8 ft waves at Express Point. Ian slipped in to one barrel after another but in the end getting that close to a world class surfer in Wayne Lynch was a great honour. Married to Rhonda in 1979 and with a family at foot the move was made to relocate to Buderim(QLD) just near Alexandra Headland in 1988. Porty built his own house and then moved into some serious surf coaching and running his own surf schools. He was Qld Jun coach from 1990 to 2003, appointed the Aust Jun coach from 98 to 2002 and the Aust Open coach 2000 and 2002. His competitive nature resurfaced to take the Qld Masters Longboard title in 92 and 93 plus runner up on 3 occasions at the Nationals. 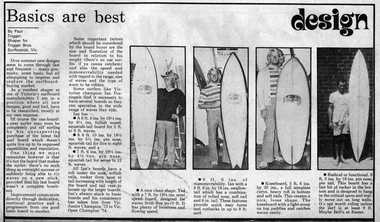 Porty is back riding shortboards and has a gem Simon Anderson shaped board. For close to 50 years the boy from Bonbeach has based his life and livelihood around a love of the Ocean. It commenced on a Port Phillip Bay ripple and along the journey successfully navigated the powerful waves of Hawaii and settled in the crystal clear cylinders of Northern Qld. 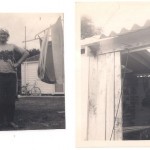 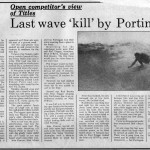 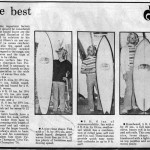 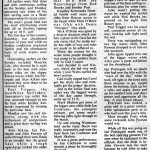 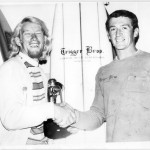 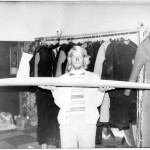