August 10, 2012Paul TriggerWay Back When with Triggs
Over the past few decades Trigger Brothers has acumulated a large collection of old school photo’s of Paul, Phil and friends from back when it all began! So we decided it’s time we get Paul to write up a short story about some of these classic moments in time… from local sessions and state titles to random road trips across the country.
Trigger Bros. 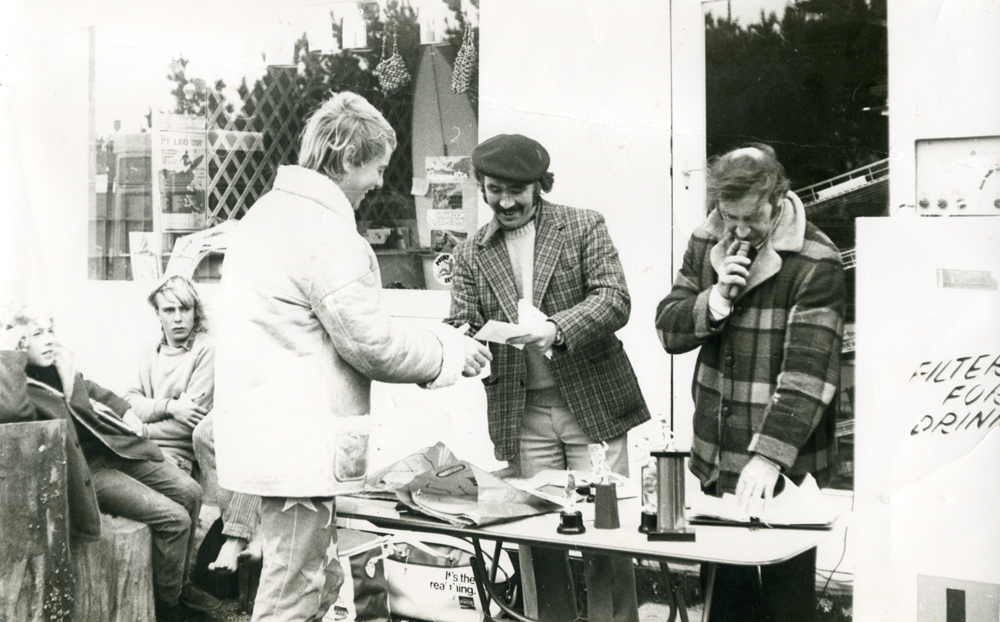 This photo was taken during the presentation of the Point Leo 1200 1974 awards, the photo features on the mic the late and much loved Stan Couper, president of the Victorian branch of the Australian Surfing Association. Taking on a voluntary position Stan and his wife Vi did lots of long hours running our surfing comps in a professional and orderly manner. Not even the likes of outspoken superstars Nat Young and Terry Fitzgerald were stupped and bowed to when pulling a tantrum for special treatment. Stan made sure there was an equal playing field for all and did a magnificent job at all events.

The Pt Leo 1200 was the brain wave of Colin Clatworthy, who along with wife Mary had built up a very good small business catering for the campers and surfers needs. He put up some cash and along with prizes from other sponsors the 1st East Coast Professional Surfing comp was kicked off in July 1973. Alan Atkins from the West coast won that year and followed up with a 2nd in 74 with Leo firing up to 8ft for the Sunday final. That year Phil Trigger was the winner, Maurice Cole 3rd and the rising star, at least by the pants he wore in this photo, Ted Bainbridge in fourth place. Trigger Bros no.1 team rider Ian Portingale placing 5th.

Colin’s event ran again in 1975, this year drawing quite a few prominent interstate surfers keen to brave the cold waters for a cash reward. Small surf saw the the Final shifted to Portsea where Big Wednesday stunt man Bruce Raymond was far too good, Queenslander Andrew McKinnon was 2nd, Russell Lewis of N.S.W. 3rd and Victorians Mick Pierce, Allen Tibballs and Paul Trigger filled the minor placings. Even having sold the store Colin and family continued to live at Pt leo, his son Johnny developing into an outstanding goofy footer, the king at 1st reef and a superb tube rider at G Land as seen through thine own eyes.

Mary and son Michael still live in the Point Leo estate, with Colin passing away some ten years ago. Watching on at the presentation are two young groms Cameron Ross on the right from a group of young surfers living in and around Sycamore St Frankston. They were affectionally known as the Sycamore Savages and on a couple of times when the P.S.C. ran its footy match Phil and I gladly joined their team to take on the St Andrews All Stars (Mick Pierce’s team) and the Davies Bay boys from Mt Eliza, who were naturally professionally payed players with Jeff Vockler driving the team bus and not forgetting their lovely marching girls. Cameron was a good solid surfer but more importantly a super nice guy. Wilco and I would occasionally spot him passing through Frankston more often than not on his bike. We would always pull over for a chat. He was never someone we thought would ever have a problem with drug abuse. Sadly though he is no longer with us.

Sitting on a stump is Christian Clarke who looks right at home and so he should be, his parents brought him up in Western parade just a stones throw from 1st Reef and Crunchy Pt. He now lives with his own family 50 meters from where he was seated 38 years ago at the time of this snapshot. Along with his mates Fordy and Trucker I’m yet to see a more fearless threesome in the water. Christian’s surfing ability, particularly tube riding is way above average and more recently with two young daughters now surfing he has expanded his surf vechicles to include a paddle surf board on which he has already won selection for the National Titles at Coffs Harbour. 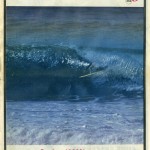 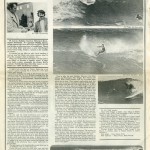 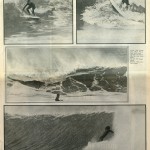