June 25, 2012toddWay Back When with Triggs
Over the past few decades Trigger Brothers has acumulated a large collection of old school photo’s of Paul, Phil and friends from back when it all began! So we decided it’s time we get Paul to write up a short story about some of these classic moments in time… from local sessions and state titles to random road trips across the country.
Trigger Bros. 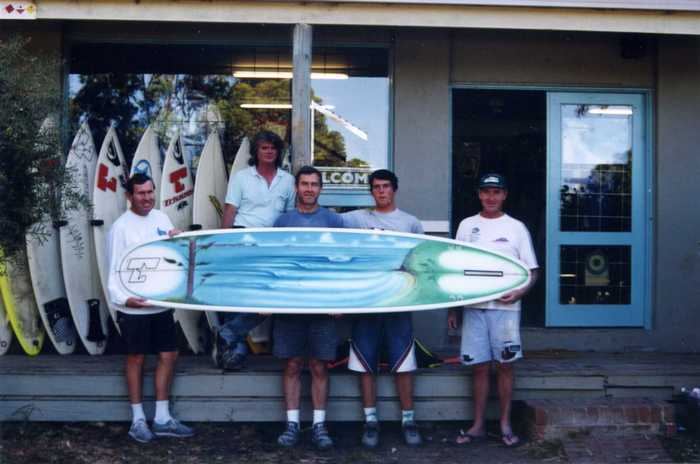 Al Francis has been with us part time since ’73 and full time since ’85. During this time Al has been responsible for most of the repair work but also has shaped and glassed a few boards along the journey. His work is of such a high quality that sometimes its even hard for us to spot where the board has been repaired. Like the Travelling Wilbury’s he packs one board bag with surfboards and the other with guitars (his passion) for his Maldive Mania trips. There’s not too many Aussies that could match his frequency and he also manages a yearly pilgrimage to Ulladullah. 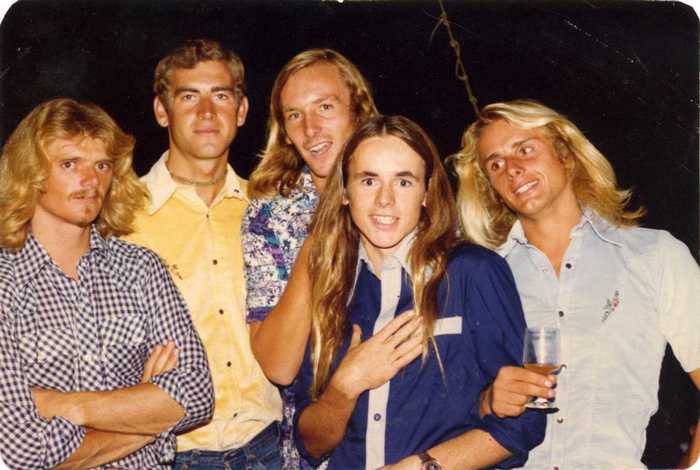 John Jolly has glassed our surfboards for the past 35 years, and because he takes so much pride in every step of the production process, his contribution is 1st class. In 1971 he and Dale Evans moved down to a farm at the southern end of Coolart Rd in Somers (most likely the first surfers to follow their dream in this area), where they chased the waves and made surfboards, ala Morning of the Earth. No one, not even Phil and myself has surfed the Point more than John, but it’s the bigger waves that bring out his hellman attitude. He’ll paddle 20 minutes to Sunset at Flinders and surf 10 to 12ft waves on his lonesome (he must be nuts). On a late 70’s surf safari to Puerto Escondido in Mexico with Cocky and Stretch Bingham I’m told he was taking 10 to 15ft drops bouncing off the bottom and charging out for more. 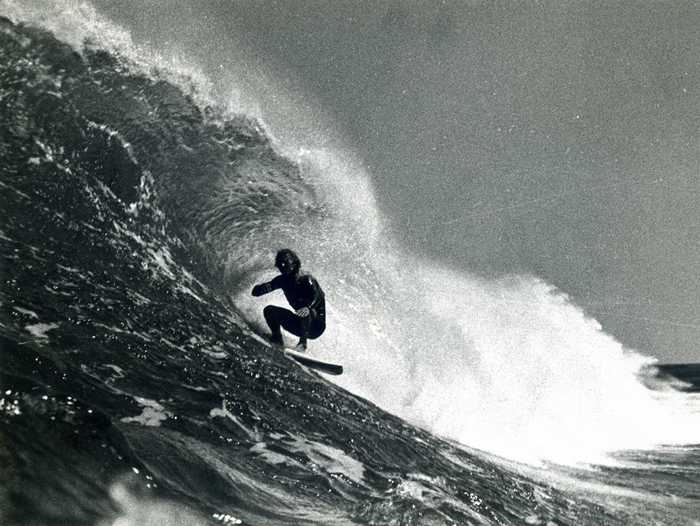 (This photo was featured in Tracks Magazine)

In 1972 John and Mick Schaffer travelled up the coast to Lennox Head. They were lucky enough to get bogged on the original muddy track that ran from the Surf Life Saving Club. With the help of the occupants of two cars stuck behind them they all got through to the Point, and the reward was classic Lennox with a crowd of six featuring none other than Nat Young, Bob McTavish, George Greenough, and Baddy Treloar. What a good mixer John is! Some say JJ tends to get locked in on certain trips (since ’72 he has holidayed at Angourie for two weeks on 35 occasions). Having stayed with him on a few of these trips I can understand why. The answer is simple, it’s a fabulous place for waves and off the track a little bit. Chatting recently with the boys at the factory on Michael Peterson’s passing, John recalled paddling out to join a lone surfer at Anga in 1975. It was the man of the moment M.P. seeking some solitude after his 3 Easter Bells wins. Unfortunately he paddled in after just a few waves and even fewer words. 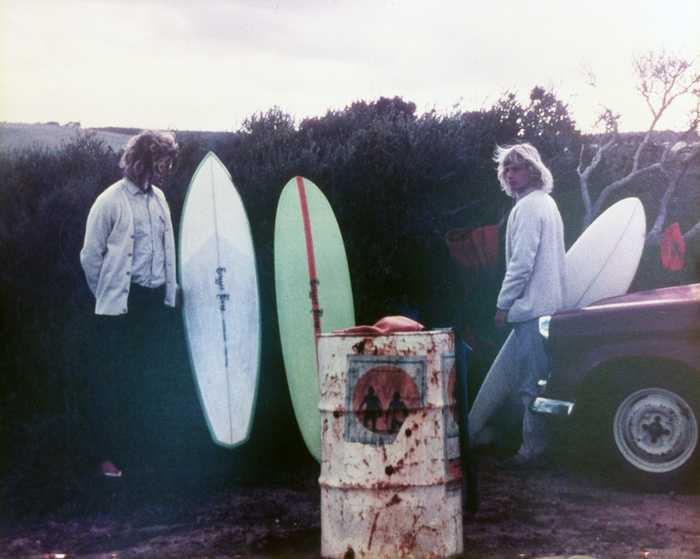 Morning of the Earth had just been released.

Adam Butler sanded, polished, and ran the Leo store when the rest of the team snuck off for a surf at the rock. He now runs a very successful garden maintenance business in Red Hill, and owns his own home but rarely surfs.

Michael Marchants was a very imaginative surfer, multi talented and as you can see from his mural quite artistic. His surfing history can be linked to the Alaia surfboards; a thin wood surfboard used by the ancient Hawaiians for hundreds of years, yet virtually unsighted from 1900 to 2005 when reintroduced by Tom Wegner. Believe it or not Mick’s 1st surfboard was a 1inch solid timber version cut from an old dunny door with a timber fin screwed onto the bottom and he surfed it at Pines in 1968.  I just wish I had been there to witness this historic moment. 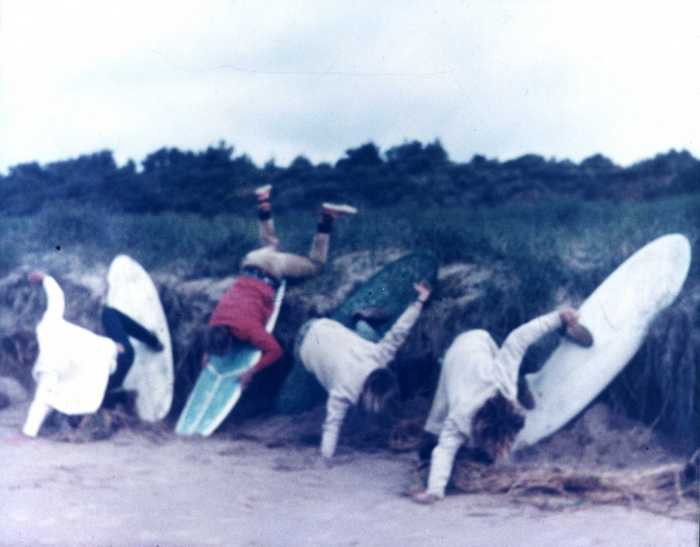 The Crew fooling around at First Reef

By the early 70’s Michael was one of the very best peninsula surfers with placings in a couple of State round Open finals, but free surfing in a contest area cost him a two year expulsion from the Australian Surfing Association, and bitterly disappointed he never competed again. He continued to love his surfing becoming an exceptional tube rider because of his ability to switch foot and get barreled as a goofy.

Some blessed with artistic talent can be kinda quirky, but not Michael, he had more of a connection with the Dream Time and was a great storey teller not dissimilar to Phil Grace. We used to pick Mick up and take him surfing and because we were his mates he let on that he should be called the Dolphin, as Wayne Lynch was already called the fish. Walrus and seal were all we offered which wasn’t very generous on our behalf, but at least we kept his feet grounded while his imagination and passion for the ocean went full steam ahead.

Even though Mick was was extremely close to his family (later in life caring for his mother and also spending large chunks of time helping his sisters) he left home at 16 and went to work for an abalone diver living in Shoreham. On one summer’s evening he invited Ted Bainbridge and I around to watch him glass his new board. It was an open air affair with a bakers dozen of keen young grommets from the Shoreham caravan park all gathered around. Lighting came in the form of a candle placed on the board which in turn drew an army of inquisitive moths to the sticky resin that Mick furiously applied. It literally was a backyard board. We held back a chuckle till back in the car, and then 600 metres down the road an oversized cat charged our car hitting the side with an almighty thud. Mick certainly could conjure up some magic and entertain a crowd.

Driving Mick to work at Chelsea there was always a sparkle in his eye when he told me one of his stories. He had a very smart dog called Rampa who when pushed onto a wave at 1st reef would get barreled, of course we never witnessed the event but I’m sure it happened. One time he was surfing at Portsea when he noticed a much larger dog beating up on Rampa. The smaller dog retreated to the water as Mick paddled in while the big bully in persuit was cleaned up in the shorebreak then lay motionless on the sand struggling to recover. Rampa was quick to celebrate by raising his leg and peeing on the defeated foe.

Micks talent as an artist can be seen in the ocean mural themes on boards he shaped for us in the seventies and some like the one pictured at the top from 2005. Quite a few of our stickers also came from his portfolio. Michael Marchants is currently living at St Helens in Tasmania doing some surfing, painting and catching up with two of his best mates from the seventies Ronnie Roozen and Chris Wells.