Way Back When Ep-35 Twin Fins

July 2, 2018Paul TriggerWay Back When with Triggs

When we shaped up our first 8ft surfboard in March 1968, the drop down from the massive 10ft loggers was a huge step. Our first attempt at riding these revolutionary boards was at Duranbah, Tweed Heads on a Graeme Merrin surfboard called the Growler in late December 1967. Phil was quicker to learn than I. Maybe his bigger feet provided some extra stability, at any rate knee paddling would soon become a lost art and from that moment the need for more manoeuvrability on a wave saw the lengths spiralling shorter and shorter with every new model.

If someone had told us we would be riding 5ft 4in Twin Fins by 1971 (just 3 years later) we would have laughed. No one, maybe with the exception of George Greenough could have predicted that. George had built a Velo Balsa wood spoon in 1962 set up as a Twin Fin.
Surfboards under 6ft long were favoured by most of the Aussies for the 1970 world titles held between Bells and Johanna. Midget Farrelly was the exception and he secured a well deserved second place. Ted Bainbridge, Phil and I went down to observe the best surfers in the Universe. We expected a win to Wayne Lynch or Nat Young but both, in our eyes, struggled in the larger surf while a young Californian Goofy on a 7ft board clearly was the outstanding surfer and took the title.

Now what’s all this got to do with Twin Fins? Well following the event the immediate reaction was for the surfboard designs here in OZ to go bigger. Torquay local Pat Morgan produced his famous Keel Fins all around the 7ft mark and at Trigger Bros we shaped up diamond, pins and square tails from 6ft 4 to 6ft 8. Meanwhile, trend setter Rolf Arness, upon returning to the States, collaborated with U.S.A. champion Corky Carroll to design some of the first generation Twin Fins.

By late 1971 Phil and I were both riding 5ft 4 Twinnies. Mine had a large rounded square tail not unlike a Kneeboard, in fact I passed it onto Robbie McCartney a Victorian Kneeboard Champion in the early seventies. Phil’s had the half moon Swallow tail we had seen on The Merrin Growler. Internationally these surfboards are labelled Twin Fin 1. They were short, thick and pretty ugly with the fins attached right on the tail. 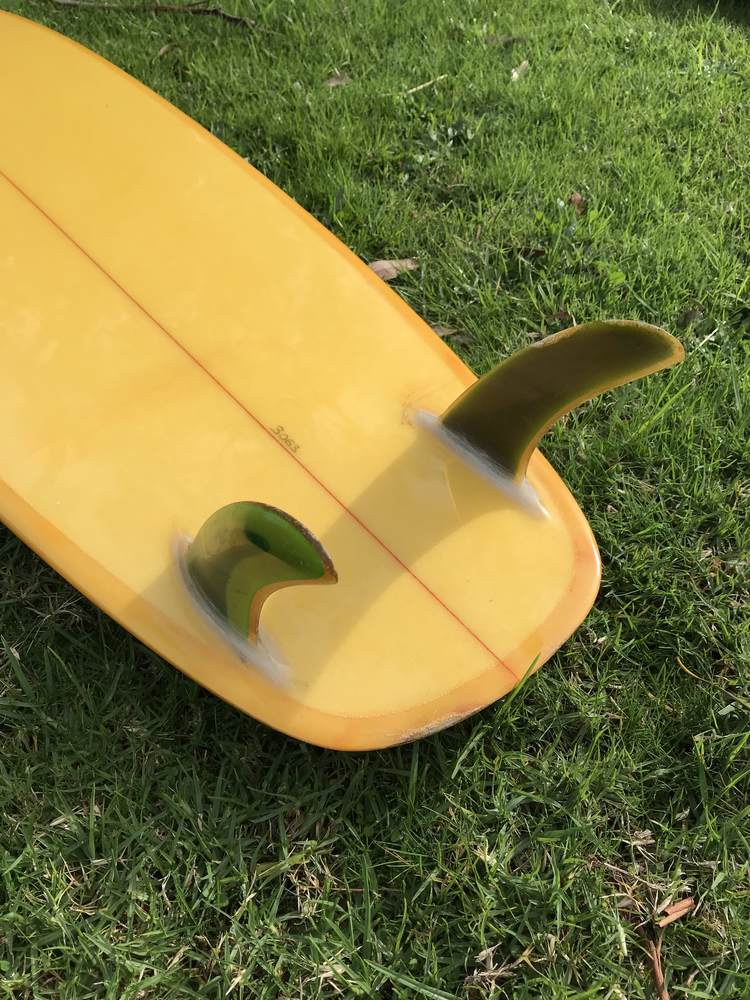 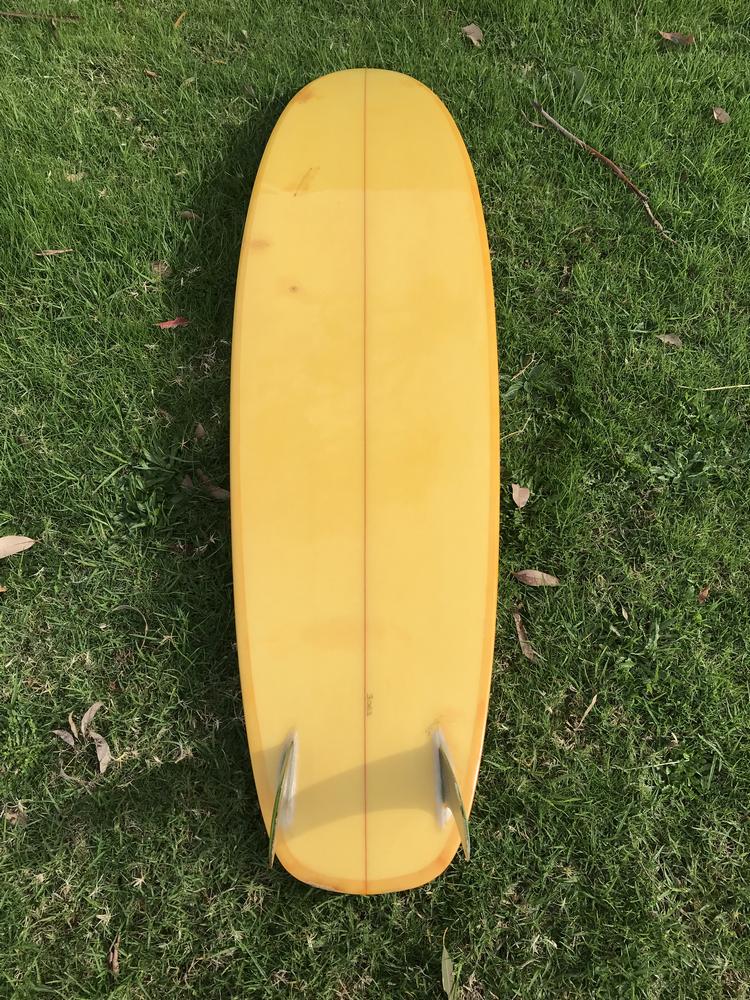 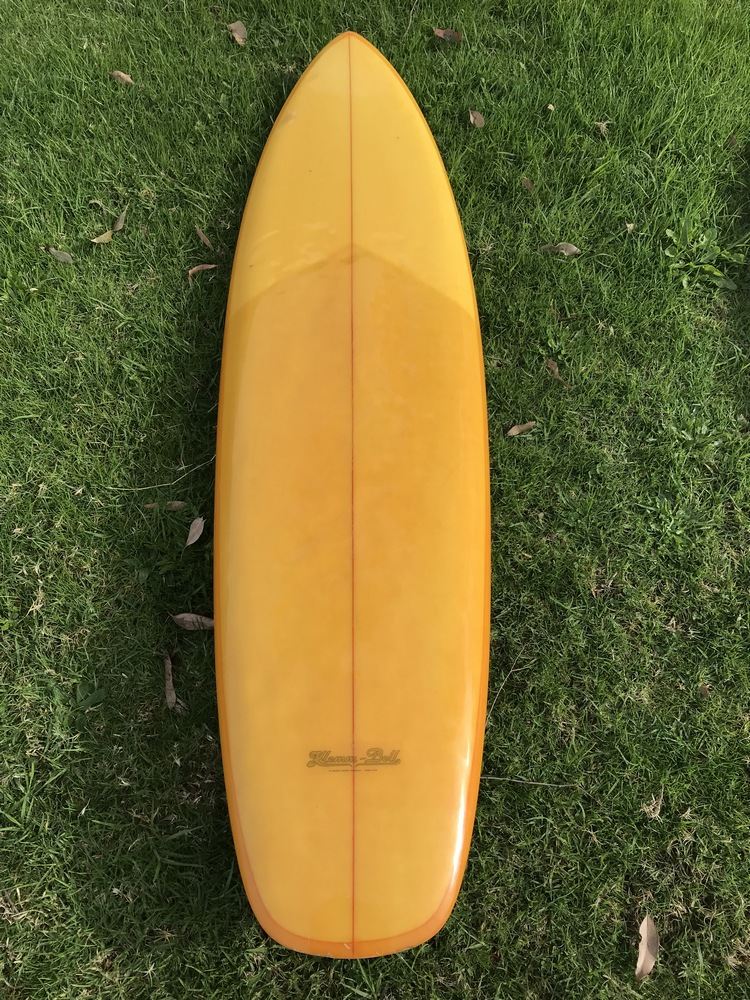 At 18 years of age I decided it was time for me to get my first custom surfboard. I drove to the Klemm Bell surf shop at Gardenvale, went in and chatted to the guys about my needs. The result was a 6ft 2 Twin Fin with hard rails and glassed in a sensational orange tint. This board has travelled up and down the East and West Coasts from Apollo Bay to Cat Bay on Phillip Island. My Twin Fin was last used to teach my son to surf in 1995. Thank you Terry and Reg for a great life changing experience, it has been amazing. – Gytis

Just where to locate the fins saw us placing them on boards, testing, then grinding them out and replacing dozens of times over before we came up with the right angle to the nose and camber. We had a couple each, but before you could blink, they were shelved by pretty much all the major surfboard manufacturers in Australia. Perhaps if all of us had glassed the fins further up from the tail as they are today it may have been a different story.

The Parkinson brothers from Portsea along with their shaper Jeff Coker were major fans of the Twins and I can clearly remember surfing with them at Portsea one summer 1972 mid week session on the best waves Phil and I have ever seen in front of the club house. The swell was up to 8ft on a double to triple up bank hideously hollow, shallow and with a crazy rip. I can’t recall having seen a triple up wave since that day. Wisely we told 13yo Ian Cochrane he had to stay shore bound as our No 1 Team Rider Ian Portingale almost drowned that session. We had morphed back to single fins and were surviving but Mick (a Vic Junior Champ) and Keith were being drawn up the face on those fat arsed twins and getting lip launched into the boiling pot. It was surreal looking in at these 6 to 8 foot barrels and viewing the carnage those twinnies created that day. 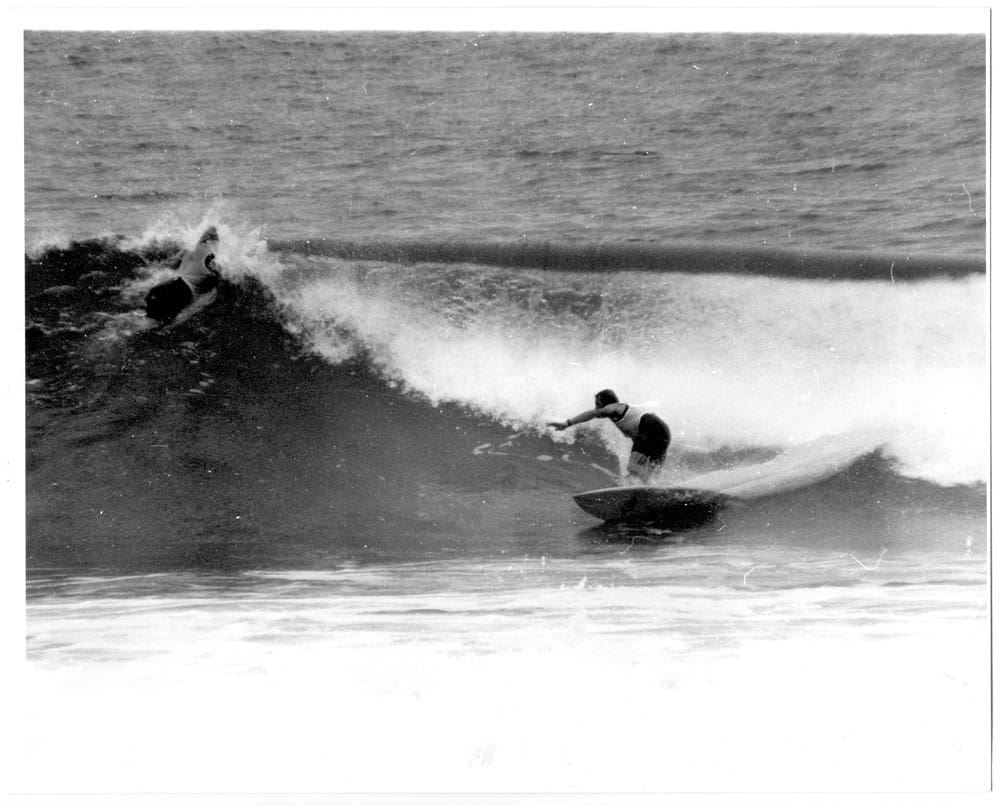 Paul Trigger competing at Rye, Victoria on a twinnie

By 1972 the Twin Fin had all but disappeared from almost every surf spot Australia wide. Shapers and Designers were refining their crafts leaving behind those clumsy hunks of foam we once thought were great. Rails, tails, and templates became eye catching as one progression led on to another. Professional surfing saw big events draw surfers travelling from far shores to compete on an Australian Circuit (Bells, Burleigh and Nth Narrabeen). Enter Reno Abellira at the 1976 Surfabout riding a highly maneuverable twin fin fish. Mark Richards was inspired with this updated version, particularly with its capabilities in small waves. He and most of the McCoy team riders jumped on board with Roger Clements also from Newcastle, becoming the 2nd best exponent of Twin Finning it down under.

During the summer of 76/77 Mark travelled back to Hawaii and paid for shaping lessons with Dick Brewer so he could put his own ideas into creating a highly refined twin fin that would just a few years later take him to 4 successive World Titles from 1979 to 1982.

Many versions of the Twinnie have evolved since and thanks to Mark and a few other high profile surfers the model is currently enjoying a massive resurgence in popularity. After trialling 5 different fin combo’s on our Twin Fins, Phil and I both choose to ride them with a small rear tail fin. M.R. was using this combo at Angourie in the 90’s when we took a few winter trips to the North Coast. This setup gives the board some down the line drive to combine with the incredible speed that a twinnie produces almost effortlessly. Because of the larger surface area of the side fins our tech expert, John Fields, came up with a longer stronger surf fin box that handles the extra pressures associated with larger fins. Below are just a few Models available in store plus a few from previous Way Back When episodes. 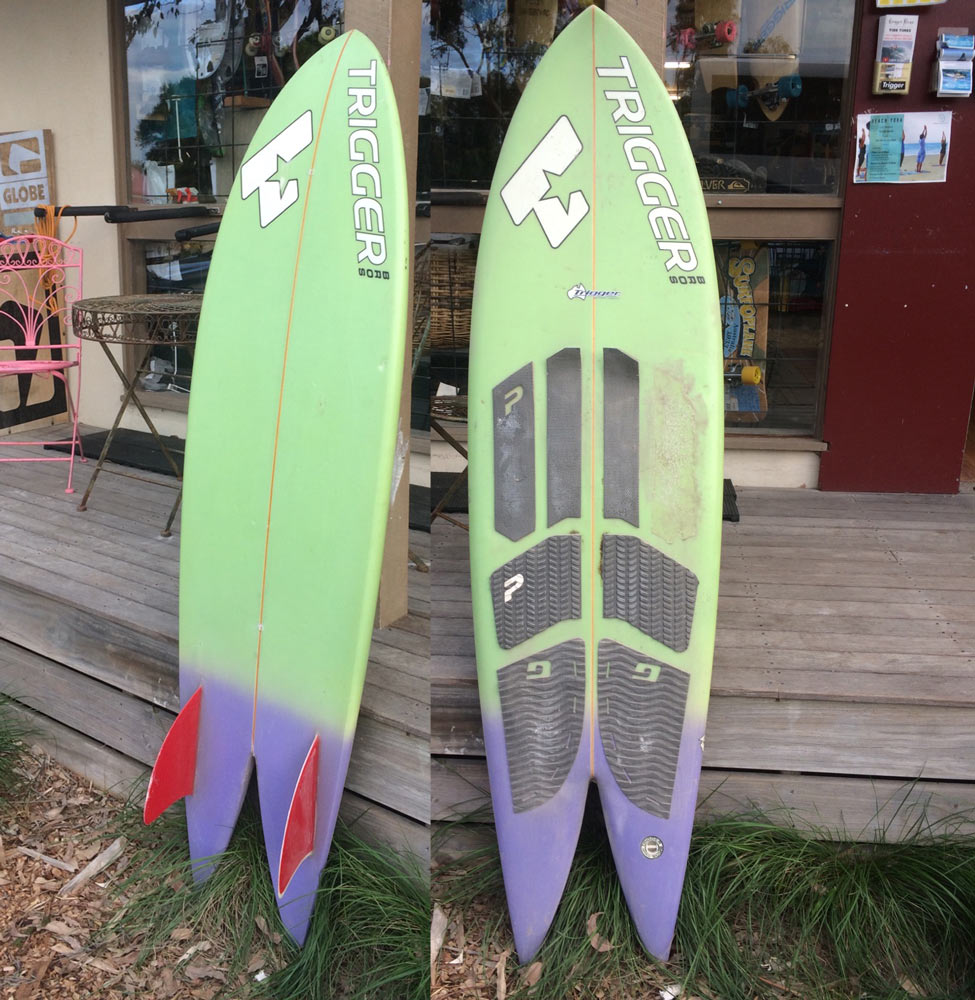 Radical Twin Fin from October 2000 shaped by Ulladullas Michael Mackie. The first of half a dozen brought back to The Leo factory by Alan Francis from one of many sojourns to the NSW south coast. 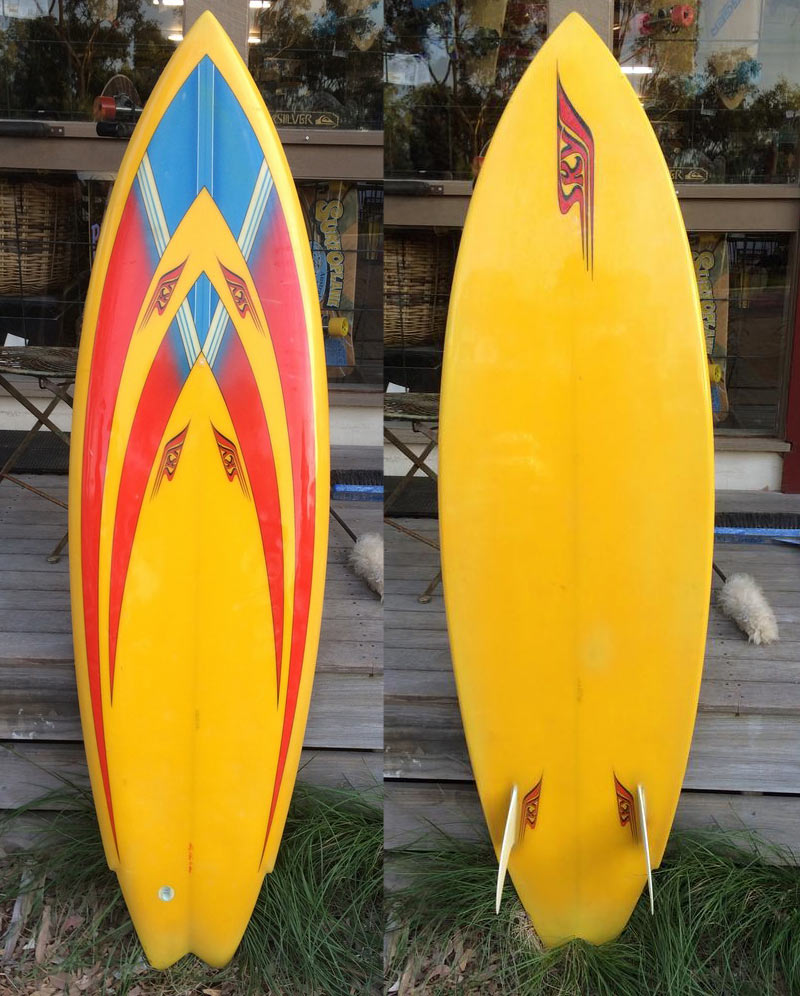 Sky Surfboards a typical Twin from the late 70’s 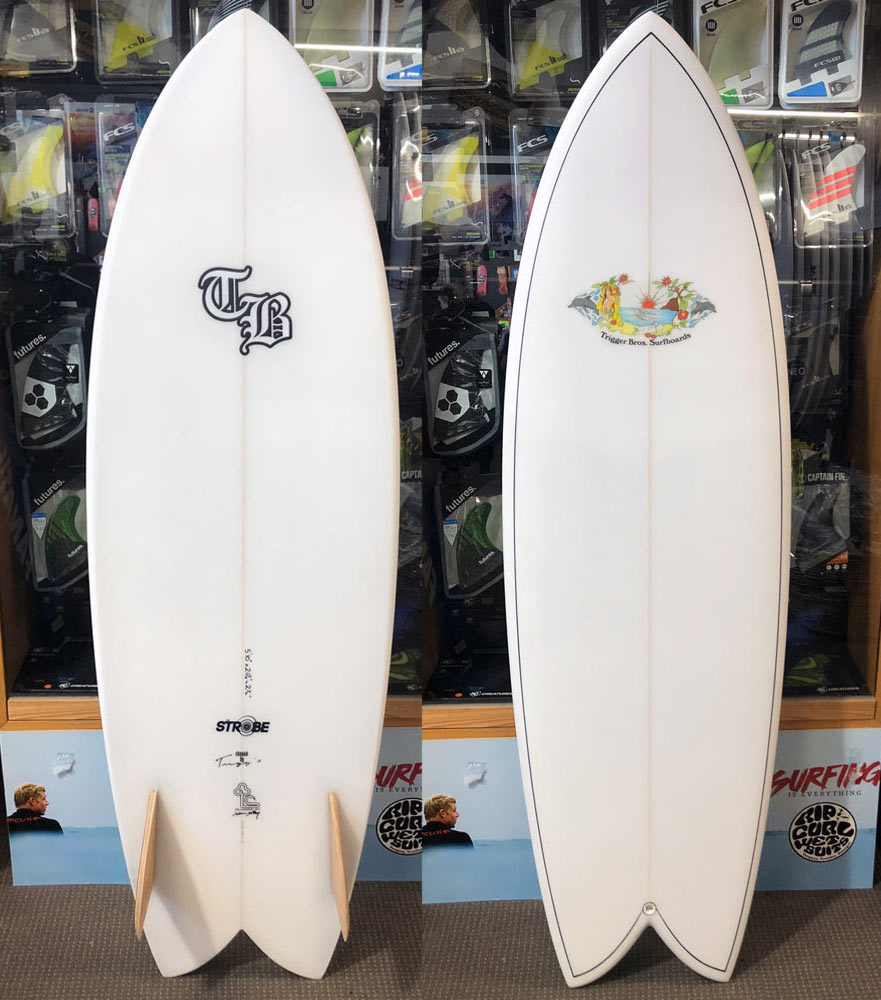 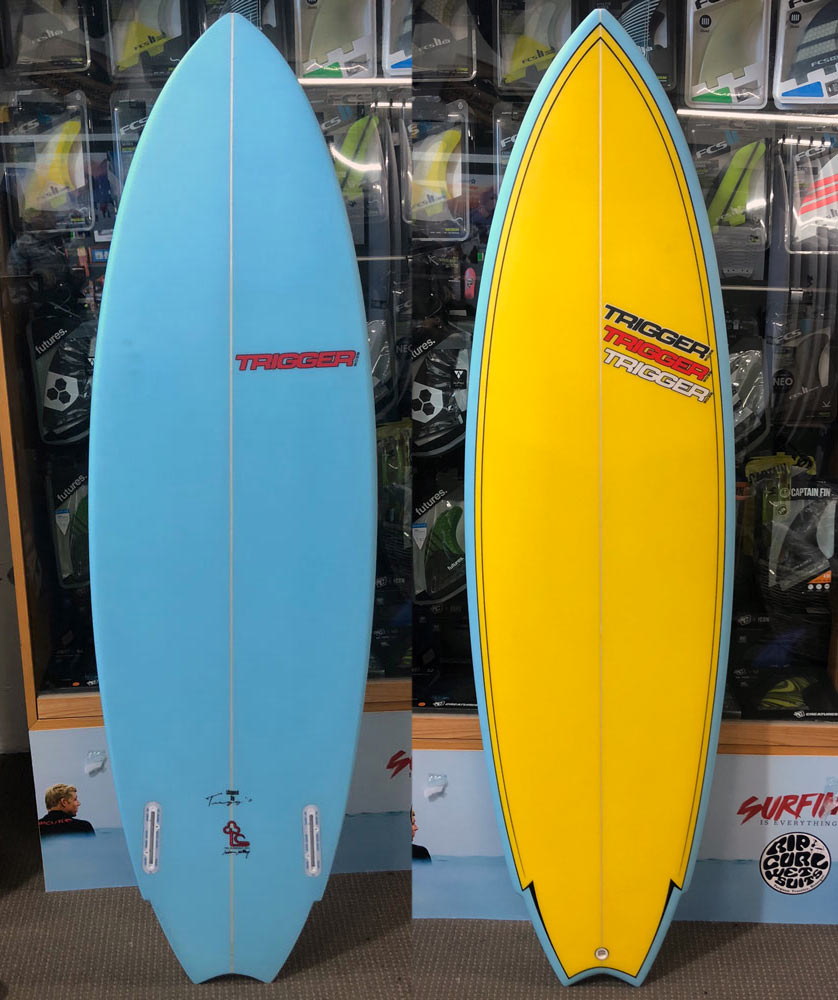 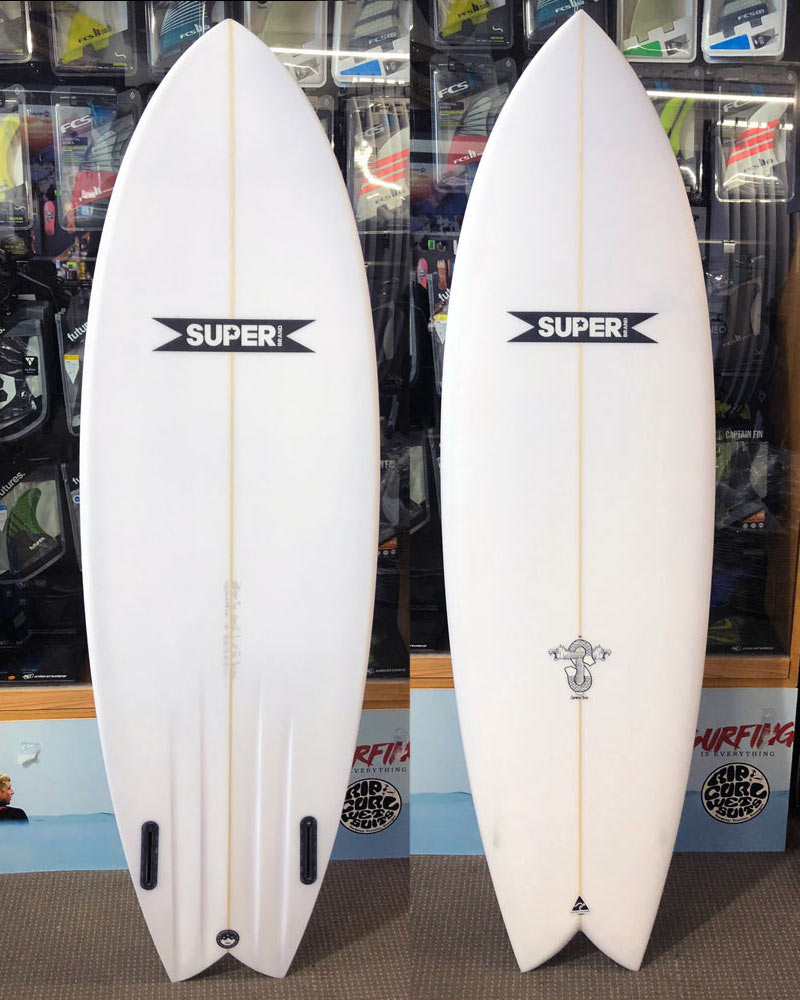 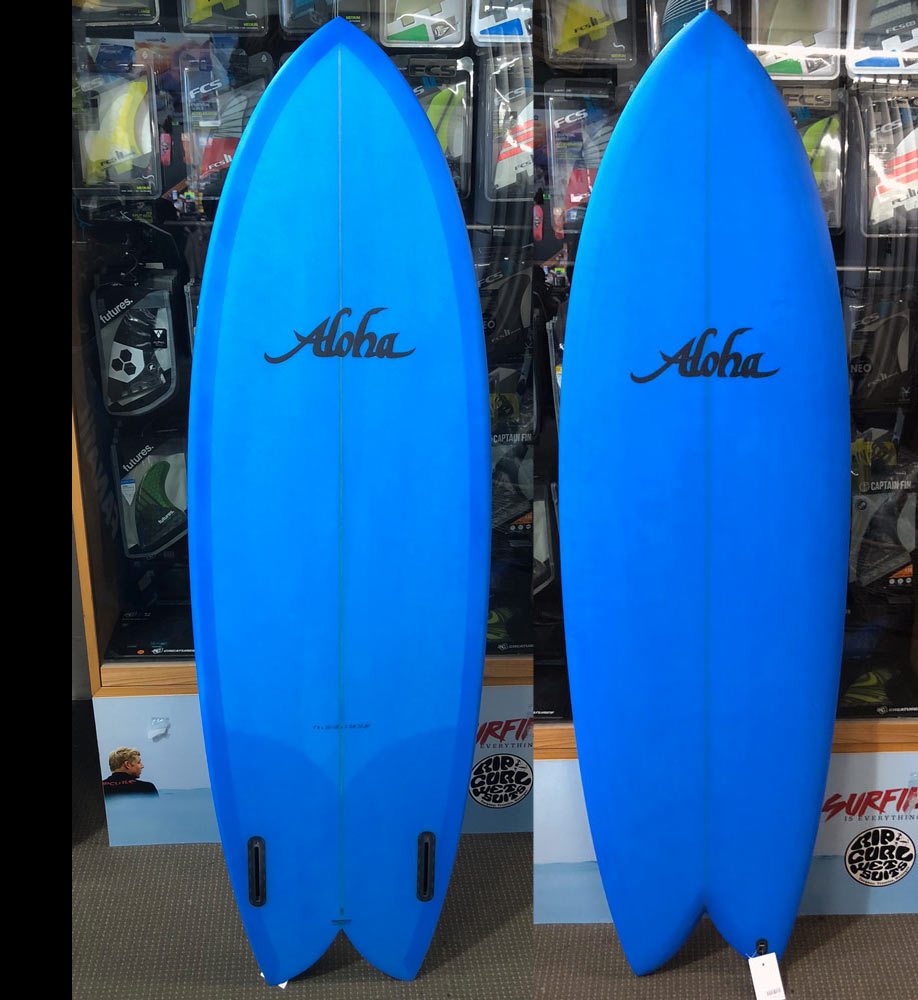 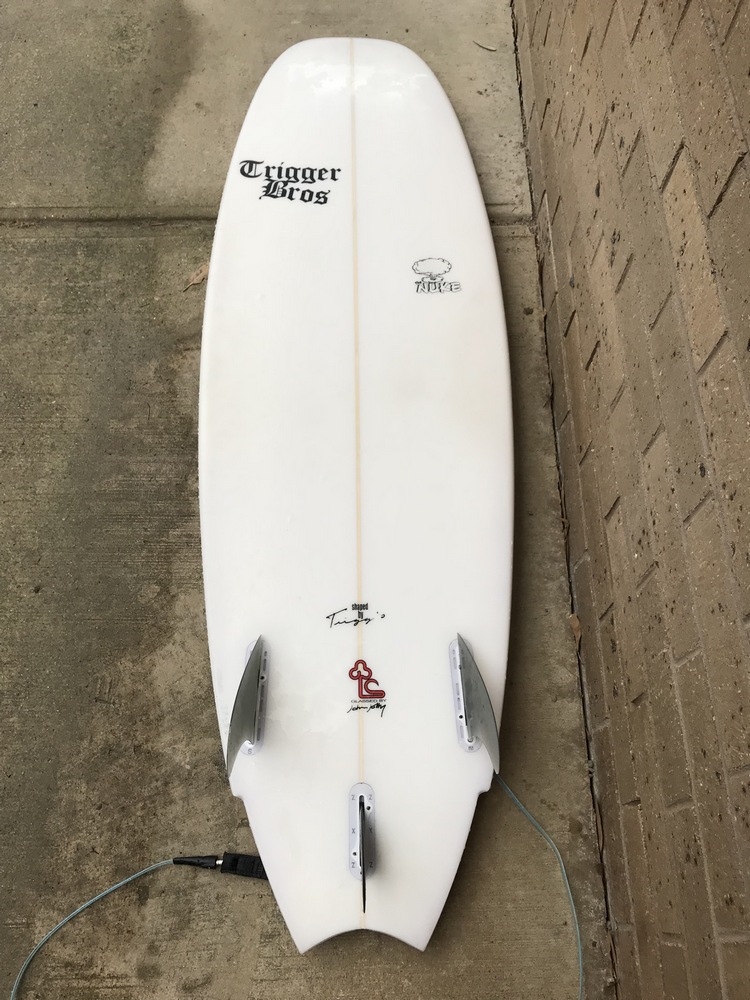 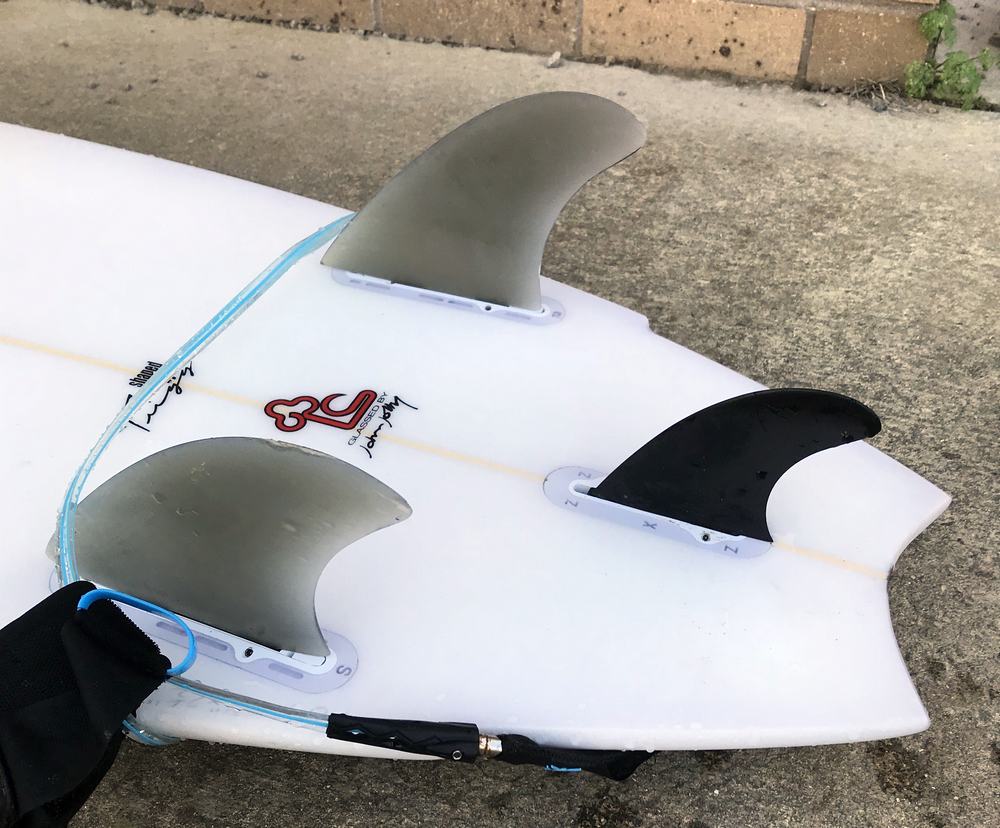 Paul’s Nuke Twin 5ft 8in by 19 ¾ by 2 ½ about 30.5 ltrs with a traditional swallow flyer. Have tried it out with five different fin combo’s and find the semi keel’s with the tail fin produces the best performance. Its my go to board for waves up to 5 ft. The faster shorter arc turns build board speed much quicker, no wonder Mark Richards won 4 successive world titles. Note all our new Twins are fitted with the Surf Fins longer stronger box developed by our Surf Tech Engineer John Fields. 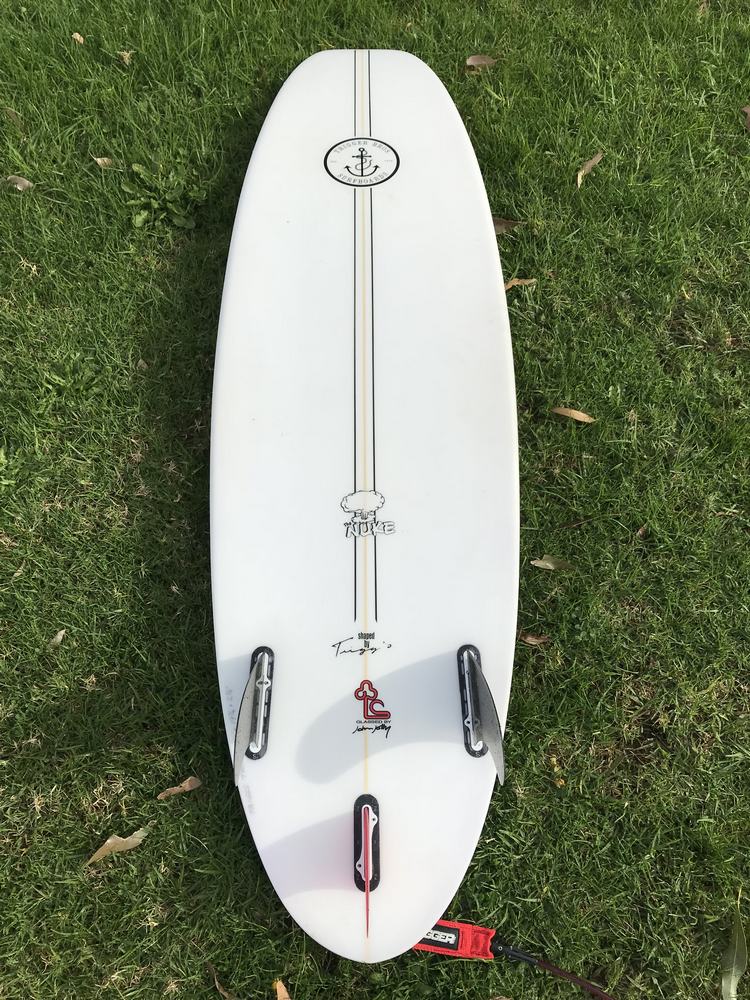 Paul’s 5ft 11in standard Nuke Twin. Brother Phil has been surfing this model as a Twinnie for 18 months and I have only just caught up. This model has the fins placed further back ( 9 ¾ inches off the tail – compared to a thruster at approx 11 ½ up ).

Phil captured a few twinnies on the water at the Superbank in QLD.