May 14, 2018Phil TriggerWay Back When with Triggs

Paul and I met John and David Taylor surfing at the 2nd carpark in 1970. John was surfing a 9’6″ Max Gill almost identical to the board Paul and I first surfed. Not too long after John came around to Haldane St. Bonbeach to order his first of 15-20 Red Rhino chasers. These were all the same color so JT’s wife Dot wouldn’t notice he had a new one every year normally just before xmas.. When I moved to Brooklyn Ave Frankston we teamed up together and surfed every day at first light and sometimes again after work for the next 5 years until I moved to Leo. We made weekday trips to Bells and would be in the water by 7am. We’d surf from 2ft to 10ft 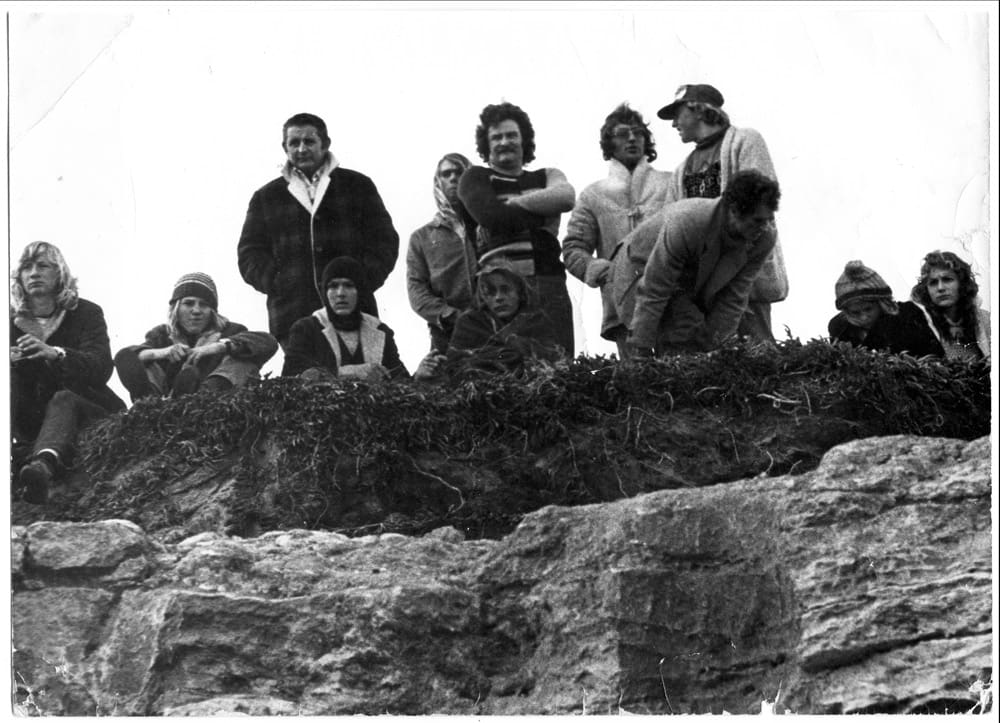 JT was a high energy hard working guy who loved his cars and drove them like a man in a hurry. In the early 70’s Gunna was a dirt track all the way from Boneo Rd and JT would love to take on every corner at speed, drifting sideways and accelerating out of the turn. Shands Rd was another favourite, sliding sideways across the bridge and then flooring it as a rally driver would. Often the drive down and back was more exciting than the surf we had. If you didn’t know him you would think he was crazy when he got behind the wheel but in actual fact he was simply a brilliant driver who thrived on speed.

After 3 or 4 years one of his mates gave us an EJ sedan. We jump started it and it ran perfectly for a year. On weekends 2 of John’s mates John Baker and Norm Coombes would join us. One day when I just got to Chelsea store the timing gear on the EJ chucked a whammy and as we were supposed to be surfing that afternoon I rang John and told him the bad news. He came to the shop at 4 with his new Orange Fairlane and said he’d tow me home. It was the most radical tow I have ever had on a short tow rope darting through peak hour traffic at 60 – 70 MPH (120+) The old EJ hadn’t been over 50MPH (80) the whole time we’d had it and the vibrations from the unbalanced tyres felt like the front end was going to fall off. When we got home I asked why we had to go so fast and he replied “I knew you wanted to make high tide at the Point”. He was right of course.

The next day we surfed early and that afternoon he came around and fitted new timing gear in amazingly quick time. He said he and his brother David both had FJ Holdens when they were younger and on weekends if they had nothing to do they would pull the motors out and pull them to pieces. 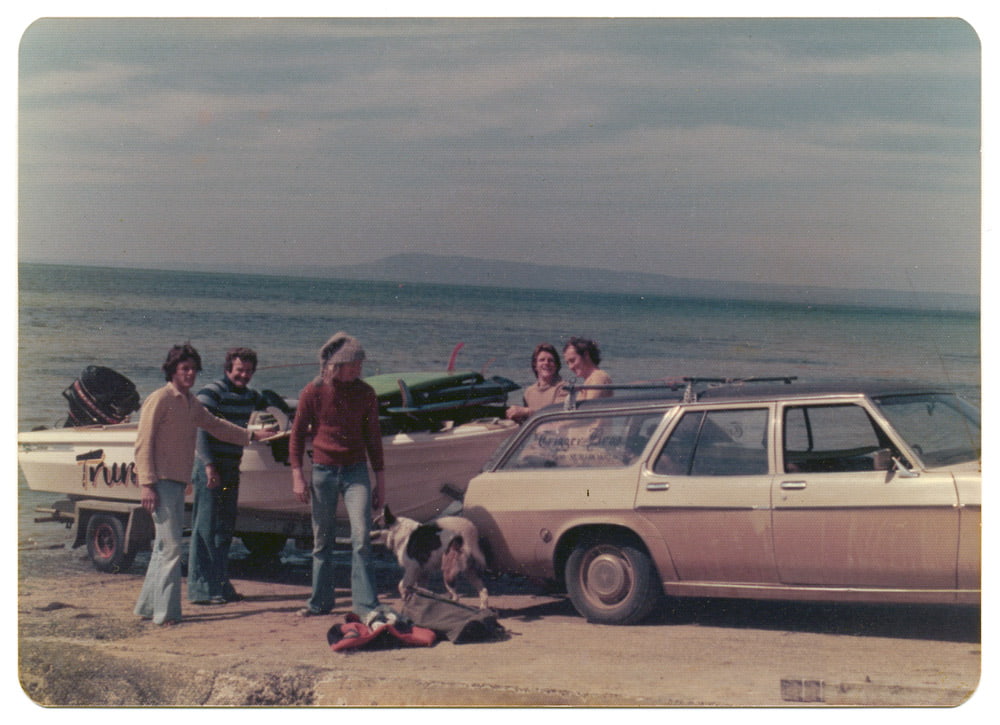 Over the years Paul and I have introduced heaps of our close surfing mates to Quarantine, pound for pound one of the best surf spots on the planet. Besides walking in, we had two specific boats that travelled to the Heads and nowhere else. Returning the favour, the Vockler brothers Jeff and Doug ferried us in on a mid seventies adventure trip where JT volunteered to lay on our 6 surfboards up on the bow. Crazy Doug, as he is known to most, decided we needed a joy ride on the return journey and seizing an unsuspecting moment he took his speedy runabout close to shore then full throttled it out through the 2 ft shorebreak at Leprosy . We were all airborn with the runabout giving an almighty crack as it returned to sea-level . Every surfboard suffered some form of damage as JT’s solid frame came crashing back down. Amazingly the boat didn’t sink but poor old JT had crook ribs for months.

After we moved to Leo in ‘77 John would come down early and we’d travel the Peninsula looking for a surf. One day we ran out of petrol just as we were turning into Point Leo road. We had about 200ml in a container which JT poured into an empty coke can, he then opened the bonnet took of the air filter and sat up under the open bonnet and as I turn the ignition on he dribbled the fuel straight into the carby and away we went the 1.5kms to the shop.

Years later when JT had moved to the Gold Coast and I was into renovating old station wagons, Phil Grace (who had shown us how to glass) pointed out the advantages of buying the same model car so you could swap the number plates over. Then if the colour was wrong a quick paint job with a roller and paint brush would do the trick.

I found one advertised at Berrick so I asked Matt Trigger who’d had his licence for just a few years to take me over to collect the new car. I never expected Matt to be anything like JT but shortly I was in for a real surprise. The plan was to get it going, put the plates on and drive it home, unfortunately it wouldn’t start so we had to tow it with the Mazda van.

We never seem to have long tow ropes so here I was about 10ft away watching the brake lights. Matt seemed to be in a hurry and we were going really well until it started to get dark and then it rained. No tail or head lights, no wipers just sitting in total darkness with one foot riding on the brake pedal getting towed along at 100 km/h just waiting for a brake light or a turning indicator . After another 40 min we finally got home and I said to Matt why didn’t he pull over when the rain started, he replied “I thought you’d want to get it over with as quickly as possible”, he was probably right! It was like a flash back as that’s just what John would have said. 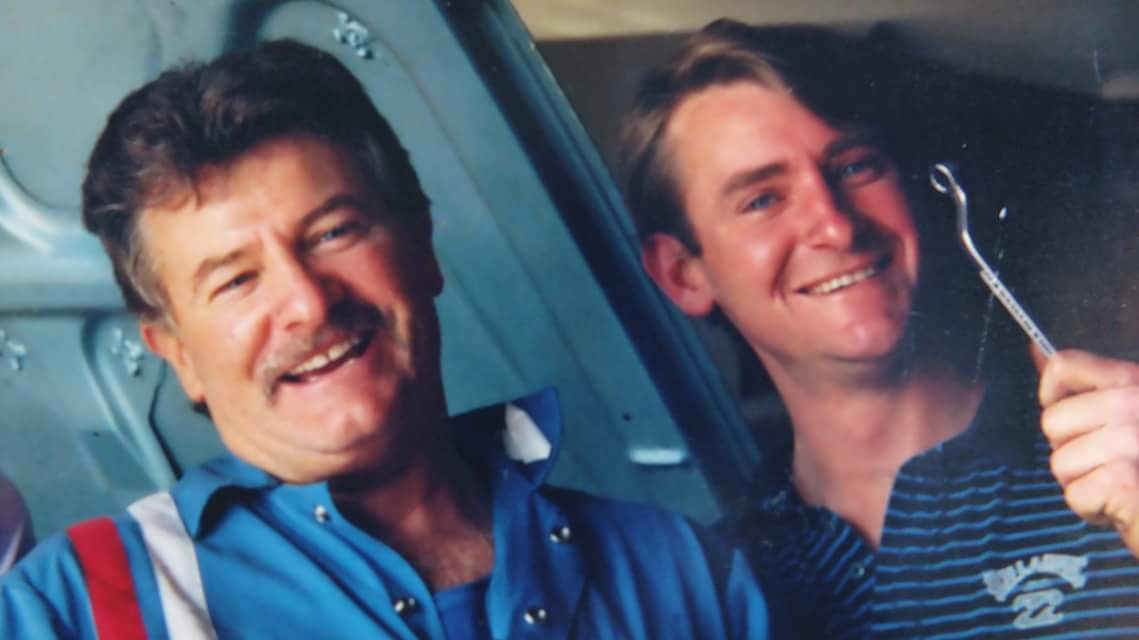 John sadly passed away in 2009 and though not the best surfer on the Peninsula he was one of the keenest for an early surf, when he could put his driving skills to the test.

John Taylor had 4 sons Peter, Phil, Garry, and Jason. Phil was a very competitive surfer, while Garry (GT) achieved results no other East Coast surfer is ever likely to equal.