Way Back When Ep 32 – Young Surfboards

December 5, 2017Paul TriggerWay Back When with Triggs

Our Vintage Surf Day held on the 12th of November 2017 was once again a spectacular success with a record attendance, good weather and approximately $7000 dollars raised for The Disabled Surfers Association. All credit to the organizers Phil Newman and Phil Trigger and special thanks to George Rice and the dozens of worker bees whose names aren’t up in lights but Phil and I know who you are and we certainly appreciated the helping hand.

As we have all seen over the past years of this event it’s not just about the surfboards but the attendance of groups like “The Suicide Savages” with colorful characters like Jacko, Mutton Bird, Your Grace Bros, Sconna, Big Tibb’s, Ronnie (last to leave) Lee and the Oke Clan.

This year we had a surprise visit from Mallacoota Local Drew Moreland, a very good goofy footer who we have fond memories of ripping it up at Bells in the early Seventies.

Another honoured guest who slipped thru the crowd almost unnoticed was Bob Young. He was of particular interest to Phil, myself and many of the older 60’s crew. Back in Oct 1964 our brother Peter picked up a 9ft 8in Young Custom Surfboard. Peter was a cadet at Frognall, the Air Force training base in Canterbury and had saved a little from every pay packet so he could pick up his new toy before Oct the 25th (birthday).

Conveniently for Phil and I, Peter kept his new Okanui (as they were called back then) at our home in Bonbeach where the two of us managed to carry the board down to the bay and learnt to ride the ripples. The Bob Young surfboard was the very first one that all three brothers rode and subsequently became inspired with a passion for surfing. 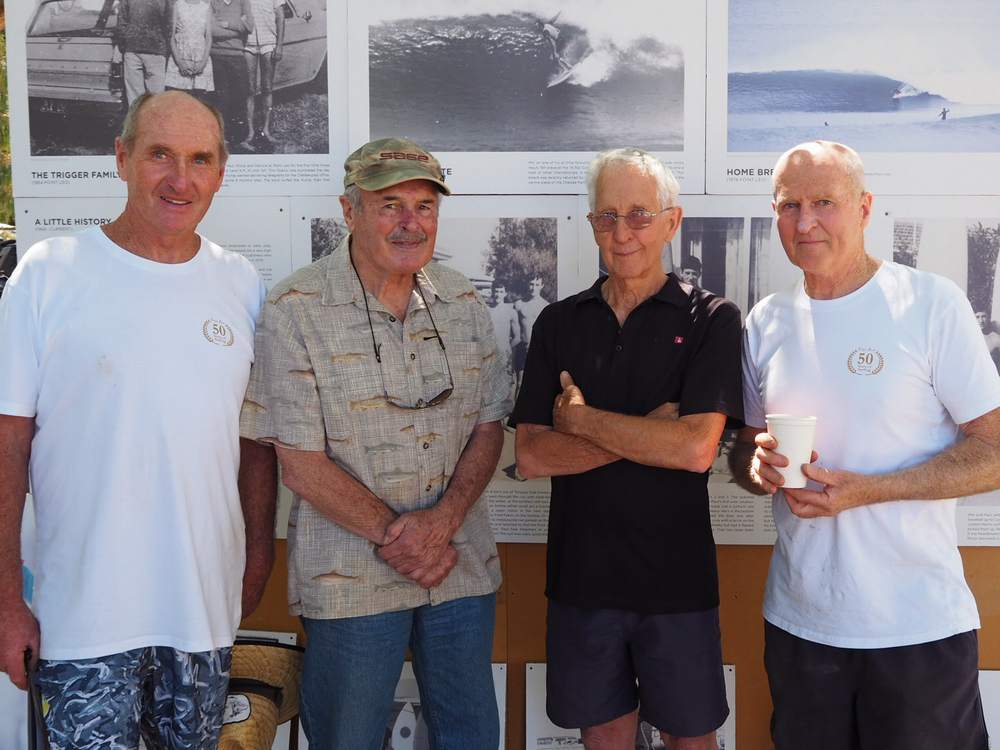 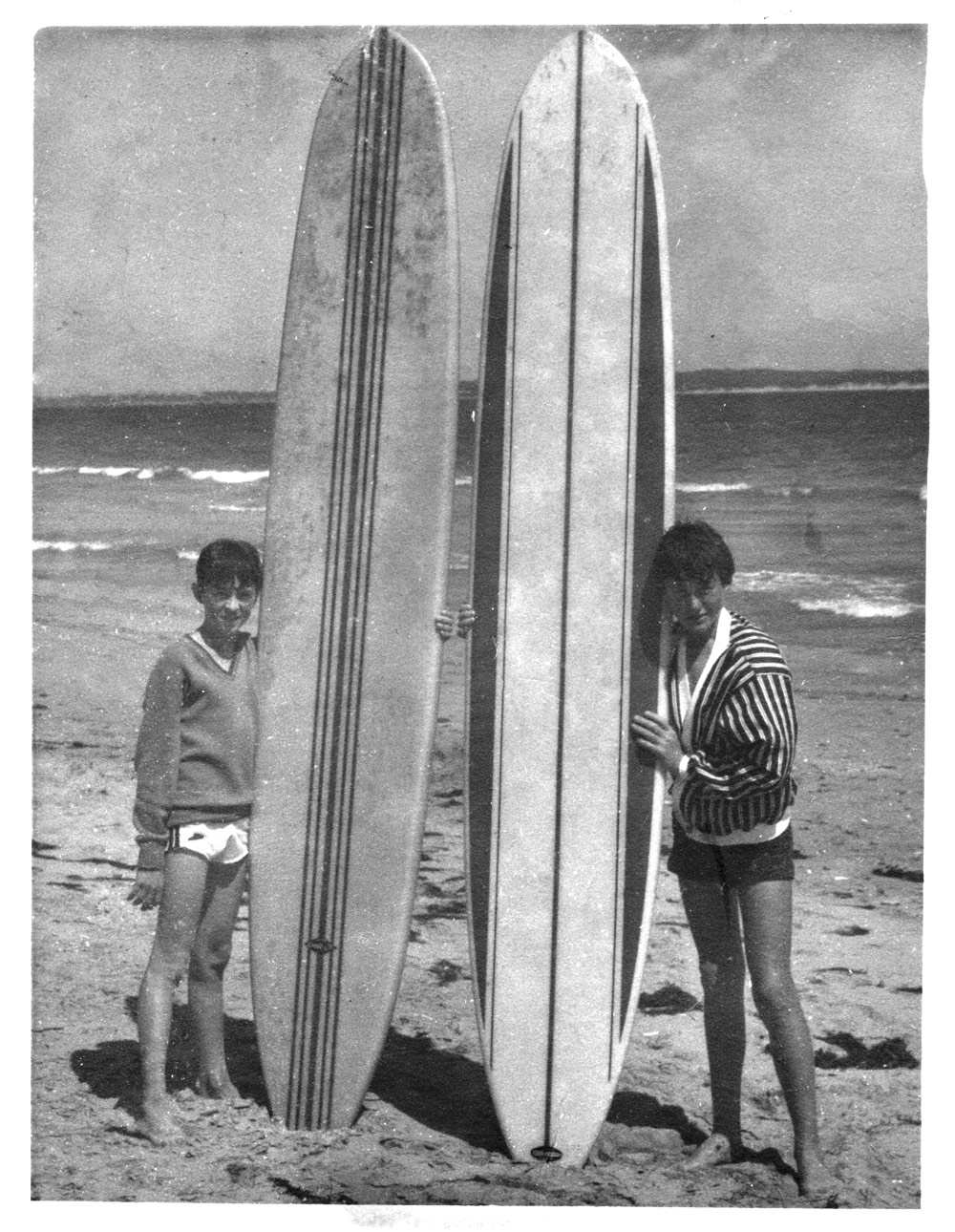 Above: Phil aged 14 holding the Young Surfboard on the right. 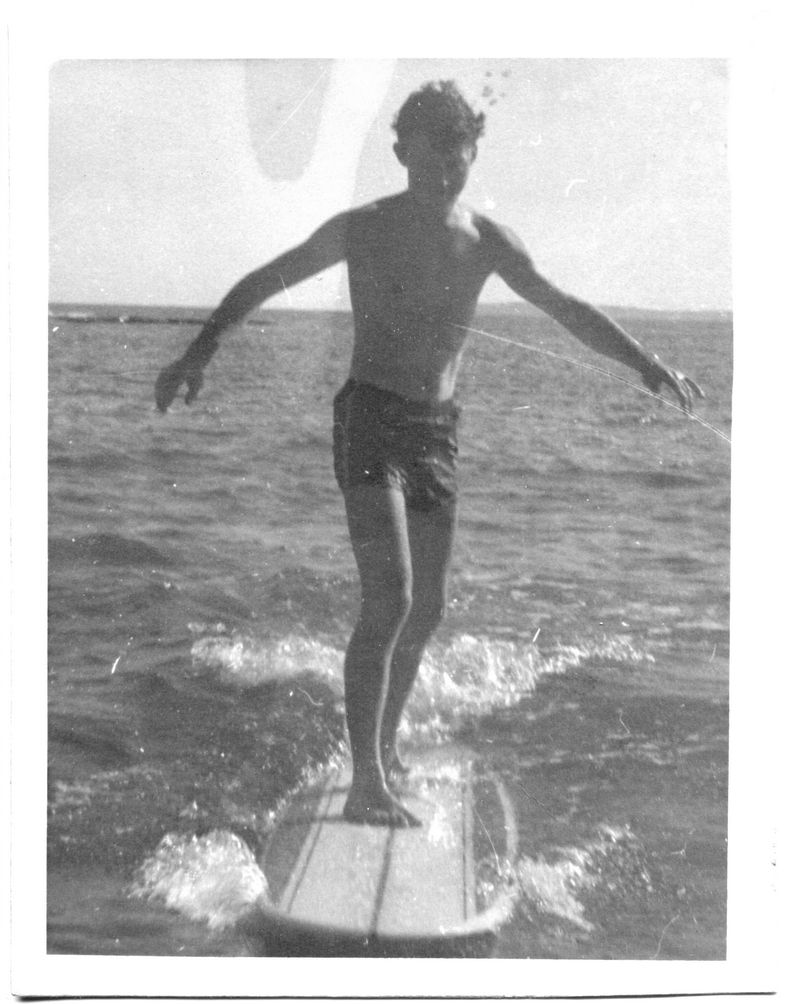 Above: Not known for his big wave exploits, Peter Trigger makes the most of Cross-Overs Xmas day 1964

There was very little we knew of Bobs introduction to surfing nor of his links to Shoreham. Below he outlines some of his memories.

My family history at Shoreham began when my Grandparents bought 10 acres of land between the Shoreham Creek and Cliff Rd. They built a guest house and called it “The Cliffs”. They did quite well until the 2nd World War occurred and caused a financial catastrophe. They sold “The Cliffs” to the Catholic Church and to this day it is still a retreat. They purchased a small block with a concrete brick house above Honeysuckle rocks. Bill & I spent most of our holidays there fishing & skin diving.

As far as I can remember I don’t think the Pines was surfed in the mid 1950’s. I don’t think the reefs between the Pines & Pt.Leo were surfed in those days either. Bill & I became interested in surfing about 1958 I think (it was a bloody long time ago). Our mates and us surfed between Torquay & Kennett River so I am not too sure about The Pines. Once we got our licenses we didn’t go to Shoreham very much as our mates had a preference for Bells Beach. Peter, Paul and Philip, thanks for the photos they bring back old memories. I have looked through my photos but cannot find any from my surfboard manufacturing years. I made my first board in 1961 for myself and after getting requests from some mates I started making more at home in the parents garage. It soon became too busy so I moved to High St. Kilda. The trading name was Bob Young Surfboards. My twin brother Bill joined me about nine months later and we changed the name to Young Surfboards. I did the shaping and Bill the glassing. We were very busy during the warmer months but very quiet through the cooler weather. We decided to close the business in early 1966.