Way Back When Ep 31 – John Schultz

November 30, 2017Paul TriggerWay Back When with Triggs

A very interesting surfboard from the early sixties came into our Pt Leo store for some refurbishing. The new owners brothers Richard and Les Stokes from Shoreham had been gifted the board by a neighbour who they had met surfing in Westernport Bay.

The 10ft Okanui is an old George Rice Island Model designed for big waves that had become the challenge down at Bells Beach in the early sixties. Just to ride these boards you had to be big, strong and in most cases the owner of a footy jumper to keep you warm. 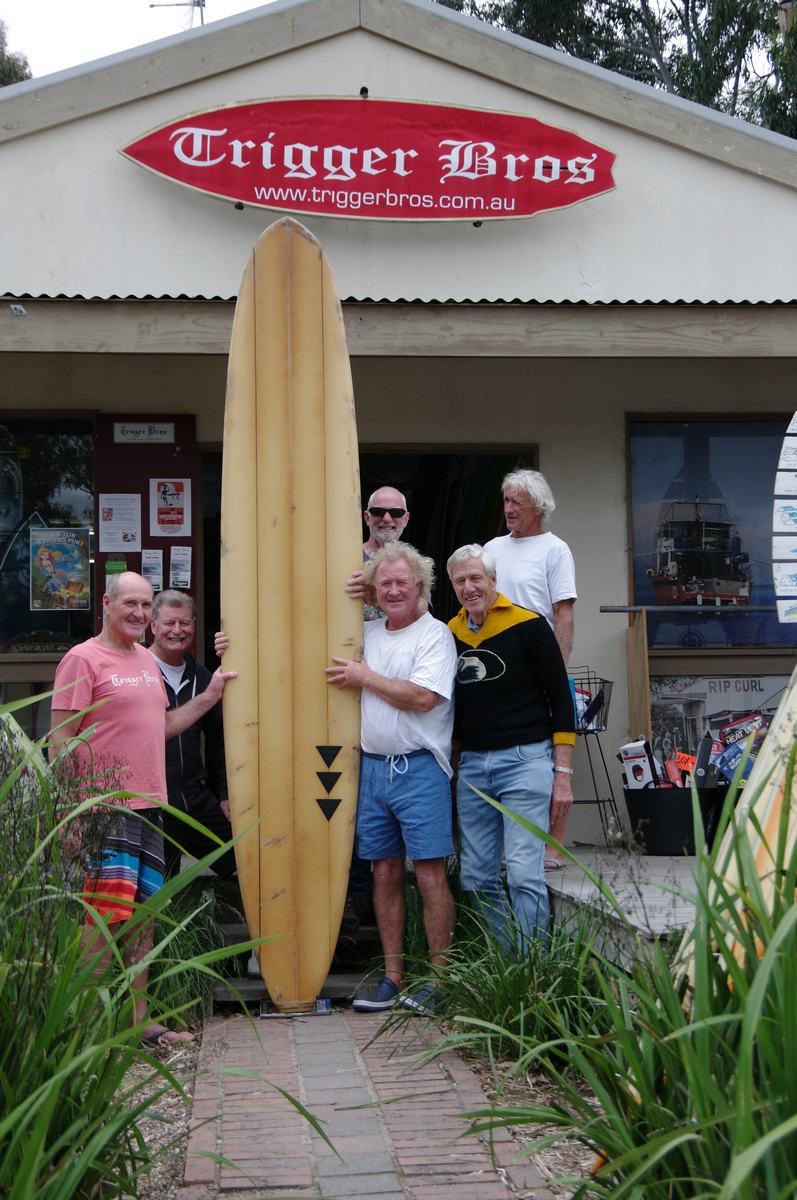 The owner of this vintage surfboard was football legend from the Western Bulldogs( Footscray) John Schultz who played 188 games from 1958 to 1968, all alongside the great Ted Whitten. At only 21 years of age he won the 1960 Brownlow Medal.

The interesting circumstances in the history of this particular surfboard is that it was the second such board passed on to him which had been designed specifically for big waves thus the 10ft length and 3 stringers. John recalls his very first surfboard ( A Max Gill Okanui ) came via Rod Olsson, a Hawthorn player in the 60’s (116 games) and later Geelong coach for 4 seasons. Of course Rod’s brother was none other than Tony Olsson the President of Surfing Victoria and the owner of The Melbourne Surf Shop located in Clarendon St Sth Melbourne and later right in the heart of the city (the first real surf shop in town). This particular board could even have been one of Tony’s own as he had a massive reputation for riding big waves as one can see in this old shot of Bells with Tony flying across a 20 ft wall on Easter Sunday 1965 during the Bells Beach Competition. 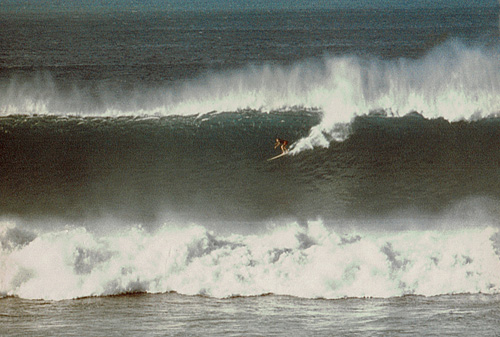 A word from John Schultz on these early days in Westernport Bay.

“Surfing at the Pines Shoreham in the early 1960s. The prompt for this story arose when I recently gave my George Rice, Island Design, Triple Stringer Surfboard away to Richard, who collects old surfboards. It weighs a ton and it is impractical to surf with now but it has been renewed and rejuvenated at Trigger Brothers for historic reasons. All the old dings in it, as a result of surfing at Suicide before someone thought of attaching leg ropes to boards, have been repaired. I was not a good surfer and I distinctly remember how well the board performed when I was not on it as I watched it cruising in on the wave after I had fallen off. Of course the board always settled and crashed against the Suicide rocks, hence all the dings and it was always a long swim in to recover it. The boards were very heavy and the easiest way to carry them was two surfers one behind the other with the boards under their arms. Despite being very heavy they still flew up into the air if you were dumped so you had to dive deep until you heard the board hit the water again.

We did not have wet suits in those days and wore woolen football jumpers. I was sacrilegious and often wore Polly Farmer’s 1961 Western Australian State Jumper. We had swapped jumpers after playing on each other in the 1961 Australian Football Carnival in Brisbane. Polly is now a Legend in the Australian Football Hall of Fame. Despite wearing the woolen jumpers we still got very cold and I was often shaking with Hypothermia as we drove home in the car. My surfing mate Nick Thomas who I bought the board off second hand always liked to be out on the water as the sun came up. 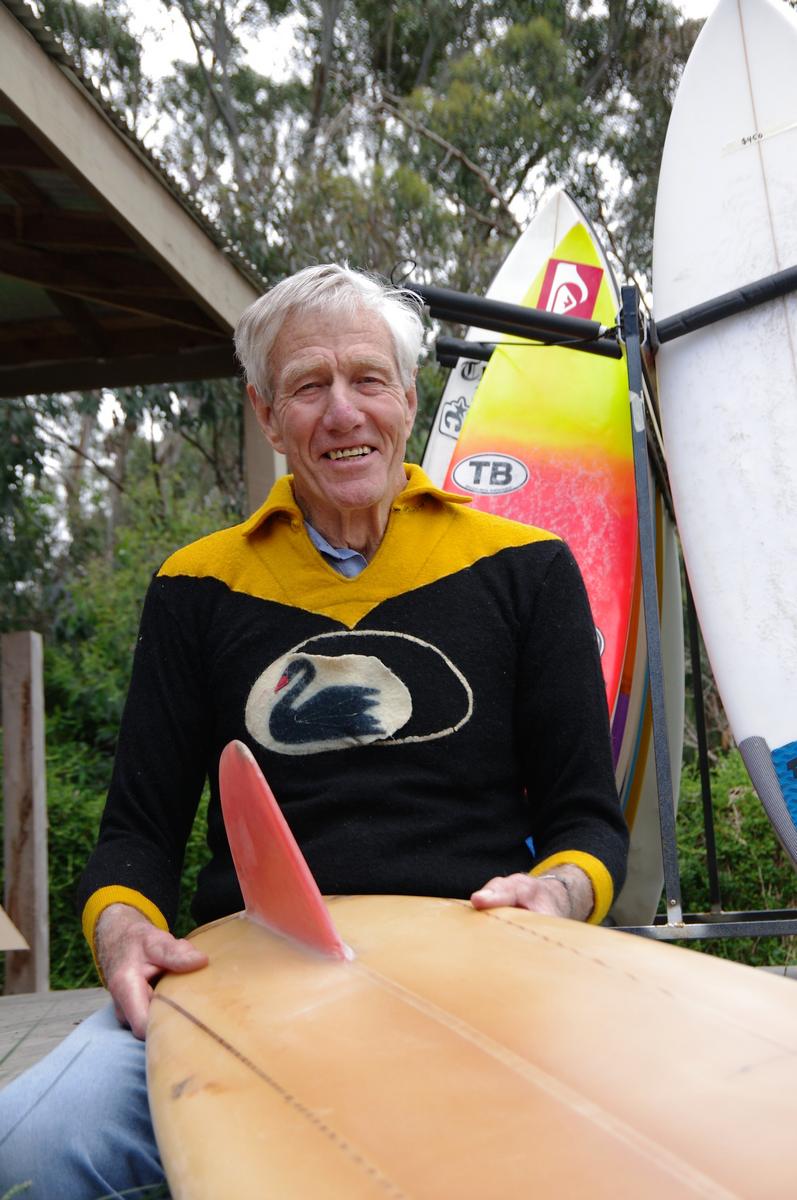 Best days for me were spent at the Pines in the early 1960’s. If you had twelve surfers out on the water it was a big crowd. Some of the regulars were Rod McKillop, Richard Horn and Chris and Ian McLennan. I have fond memories of those days and of the waves always being good and having a great shape.”
-John Schultz

In latter years John like Rod Sly of the Pt Leo LSC switched over to a surf ski and he has maintained a very good fitness level with an occasional paddle in the bay . He is held in such high esteem that he was recently honoured with presenting the Premiership Cup to his beloved Western Bulldogs. 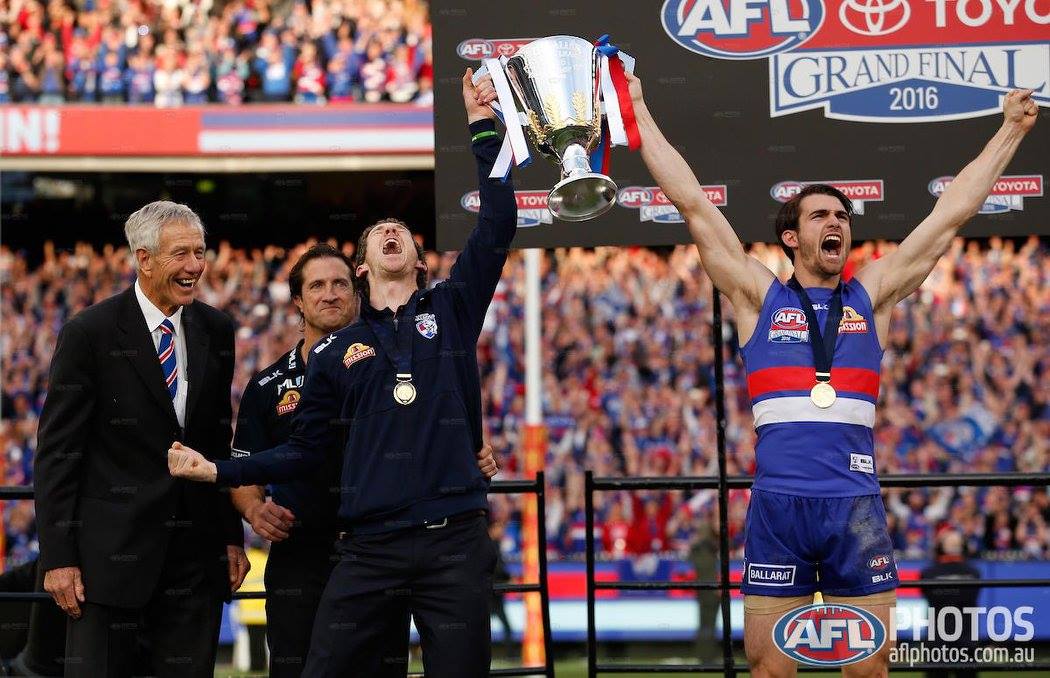 Be on the lookout and if you see a distinguished surfer wearing a footy jumper down at the Pines give him a cheer and share a wave.

Check out these Mobil Footy cards with comments from Lou Richards!