Way Back When Ep 28 – Trigger Surfcrew U14 team

April 12, 2017Paul TriggerWay Back When with Triggs 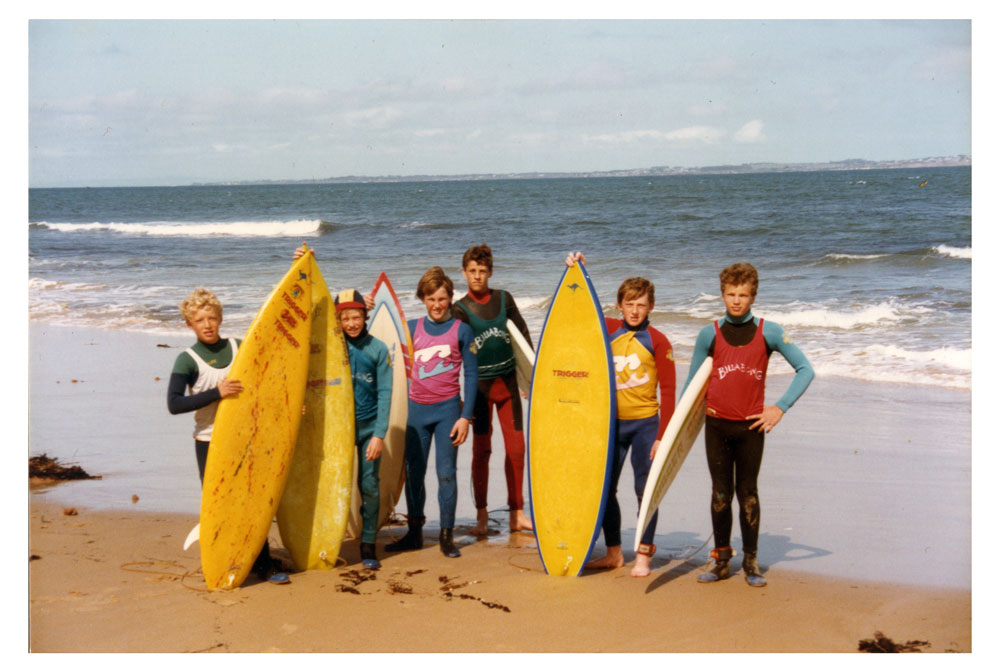 No wonder they had their little Comp at Sometimes as 4 of the 6 were Goofies (Phil had forced Matt and Simon into being Goofies even though he was a natural himself). Apart from Stilts all the boys grew up by the water’s edge at Leo.

Nic was the best surfer of the group and one year older at 13 than the others. Fordy (not in photo was 11) but by 16 years old would dominate junior surfing in Vic and go on to compete in a few pro comps with the Billabong team. Thirty three years later all of the above mentioned are devoted parents in turn introducing surfing to their offspring.

Christian Clarke and Simon Trigger both still live at Pt Leo and are in the lineup on every good day at the Point or in the Gunna area, in fact Simon is keener than ever and Christian is able to crossover from SUP’s to shortboards at will. He is one of the most courageous surfers Phil and I have come across in our 50 plus years observing.

Dave was also a very good junior surfer but for work and family reasons we only occasionally cross paths.

Stilts is yet another Peninsula Goofy footer who lives at Main Ridge and is a regular at Gunna and Honeysuckle.

Matt “Mister Fix-it” Trigger has the ability to ride anything. His high point was being one of the best in the state on Sailboards whether riding waves or Flatline speed events. He has been known to SUP on a Windsurfer One Design Hull at Crunchie Pt and amazingly has never collected anyone.

Nic Clarke was a really good Junior who wisely chose the career path. He now lives at Flinders, but spends most of his spare time with his kids at the Pt Leo Life Saving Club.