Way Back When Ep 24 – In the beginning there was snow.

July 6, 2015Trigger Bros.Way Back When with Triggs

When many of our fellow surfers were getting hooked on skiing over the winter months of the 70’s brother Phil and I stayed true to our passion for surfing and competing . At the time there were a host of great surfing flicks but in 1979 Nat Young released the Fall Line which included footage of himself and fellow World surfing champion Mike Doyle riding mono ski’s. If there wasn’t already a push towards skiing then this documentary was all that was needed for thousands of hard core winter surfers to flock to the Australian ski slopes.

Alan Green the founder of Quiksilver , Doug Warbrick and Brian Singer from Rip Curl and their good mate Speaky all ended up as Ski Patrol at Mt. Bulla, while from our own surf team Gail Couper not only traveled the World’s finest Ski fields but became one of the very first to bring an original Burton snowboard back to Australia in 1982 .

Peter Daniels, Phil Coates and Reid Bros also became excellent skiers and it was Tony Reid who introduced Peter Baker and I to the sport at falls Creek in the mid eighties. On this first snow experience we met yet another Australian surfing Legend one Baddy Treloar who was spending the whole season based at Falls. I was lucky he didn’t mistake me for brother Phil as there had been some heated battles down at Bells Beach over a number of Easter Carnivals . Even our shaper/polisher Peter Wilkinson was heading up the Hill in the late 70’s! An exciting new chapter was about to unfold for Trigger Bros.

Surfing the mountain on skis was awesome fun but on a Snowboard it’s way more like surfing or skating. Rod Stock and Gavin Crawford from Sea Level Surfboards of Hampton were regulars at our Chelsea store for Surfboard supplies. In 1985 they began making ply snowboards with camber and flip in the nose and tail most likely inspired by the Snurfer from the States. The boys were frothing and loved showing off their latest creation. Their motto was apply anything and see if it works. Gary ”Spurter” Wall was their test pilot at Hotham and with amp man Gavin behind the project they experimented, sailboard foot straps to secure a foot hold! The last few models even having metal edges stolen from a pair of Gavin’s dad’s old skis. Rod recalls some 10 to 20 snowboards were created with fibre glassing surfboard skills coming in very handy.

Spurter on one of these home made snowboards, along with female snowboarder Billie Kelly from Omeo riding the first model Switchblade from Sims U.S.A., were the first two allowed to ride the lifts at Mt Hotham. A momentous occasion and taken as a given by today’s mob.

During the winter of 1988 Peter Baker and I had our first attempt at snowboarding on the beginner slope at Dinner Plain. Unfortunately the Avalanche board we tried to ride was an absolute shocker. No sidecut, as heavy as lead and stiff as a board, subsequently it was a further 2 years before I converted. 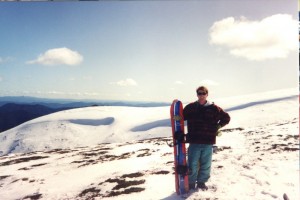 Liam in the back country with a Look Steve Graham model

1989 saw Trigger Bros 1st small step into Snowboarding at the request from our 2 best skaters in the Frankston area, Enzo Verga and Paul Templer who approached our man for all seasons Liam McCafferty (a lifetime friend of the Bros and shop manager of the Chelsea store).

Liam ordered two Sims Switchblades from Hardcore Skate Co and not long after talked us into carrying a small range at the Chelsea Store. This range widened to include Kemper, Morrow, Lib Tech and Santa Cruz. Before long nearly all the Trigger surfers and skaters had taken up Snowboarding so the shop reflected this in continuous new stock arrivals. 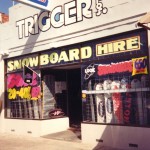 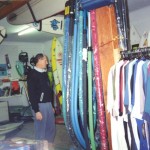 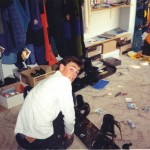 Though not our best surfer Liam’s go for it attitude saw him become well above average in every sport he took on and he had a good eye for spotting future talent. One such person was a long haired ramp skater from Albury who had landed in Chelsea with his family.

With the aid of a jigsaw and grinder Liam and I reshaped at least 50 with a nice soft rounded nose and sold the whole batch by season end.

Shane Carter has passion and amp for sport like no one else I have ever met. He has the ability to turn a crap day at the snow into one that everyone has fun. At 16 years of age and with shoulder length hair he was the last person we would have employed if it wasn’t for Liam pleading with me to give the kid a shot. It took almost a year to be convinced but once on board in 1989 Shane quickly established himself as a great communicator and along with Liam and Matt Trigger a driving force behind Trigger Brothers push into Snowboarding.

About this time a good mate in Phil Grace, working for Quiksilver in France, introduced us to a friend of his at Look Snowboards based in Austria . They were looking for an agent in Australia for distribution and we jumped at the opportunity . The company had some nice boards but even better Steve Graham one of the World’s most high profile riders was their front man and better still he was a regular visitor to Australia and also loved to surf. 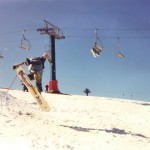 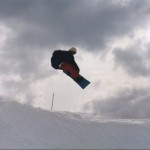 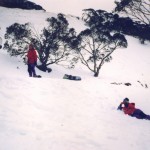 One offer from Look at a very special low price was a diamond nose all mountain board similar in shape to some of the current models however very difficult to sell in the early 90’s . With the aid of a jigsaw and grinder Liam and I reshaped at least 50 with a nice soft rounded nose and sold the whole batch by season end. Luckily the nose and tail weren’t capped with a metal edge and we only lost 2cm in the process ( perhaps a forerunner to the Burton Nug ).

We sold and distributed hundreds of Look boards until our supply dried up with the mother company Authier in Switzerland going bankrupt. It was time to take a new direction. 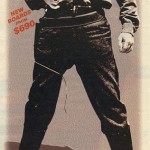 An early Advert showing the brands we originally stocked. Some still exist but a few are long gone.

During the Summer of 93 Liam and Jake Mannix from Mordy Surf headed off to the slopes of Whistler for the season . By January Shane was also very keen to go so we offered him some financial assistance if he would check out The Ski and Snowboard show in Las Vegas after doing a few weeks with Liam at Whistler. Shane travelled with fellow skater Matt Maunder and under instructions to try and pick up a quality brand with good history ( ie Barfoot , Sims, Burton or Winterstick ) he managed to secure the Australian distribution of Winterstick Snowboards.

Like surfing in the 60’s and 70’s snowboarding was the new buzz sport with the hardcore crew even sleeping in their panel vans such was their passion. Shane Carter typifies this profile having rented a property with his mate Ralph at the foot of Bulla every year since 1990 and then travelling in the summer to Utah without missing a season.

The quality and performance of Winterstick Snowboards made them an immediate success in Australia and to combine with their distribution we developed our own Outerwear label T-Bird. It was all pretty exciting for a few years, however it soon became pretty obvious that if we didn’t secure the likes of Burton with its massive range of innovative products we would be left behind the pack so far as retailing. Winterstick and TBird were gradually put into mothballs . At this stage of the early 90’s Burton had a limited number of outlets so we moved our snowboard focus to the Frankston store to facilitate winning a dealership and then added the likes of K2 , Libtech, Capita, Roxy, Salomon, Union, Signal and DaKine to compliment a really pro snow package.

Next Chapter – The Team Riders