Waist deep at the Bird

One of our old team riders and favourite sons Rick Baker being back in the country, we thought we would share with you a story of luck, planning and powder! For context, Snowbird is a simply massive resort with some of the driest snow on the planet, scoring here is something you will never forget.

It was this day. We were in the first group of cars allowed up Utah’s ‘Little Cottonwood Canyon’. We’d tracked the storm and flown into Salt Lake the day before. It had snowed two feet and it was our 34th birthday. ‘Miracle March’ they’d been calling it as it hadn’t snowed much this season in Utah. We got to the Snowbird parking lot and headed up straight up to the summit. We didn’t even bother with the tram, knowing it would be madness. We lapped ‘Little Cloud’ with no one on it.

Fresh tracks under the chair! It was kind of weird, like ‘what gives?!’. After 3 or 4 runs on that, we got to the top. Mineral Basin, the ‘European style’ bowl that makes up the backside of Snowbird had been closed for avalanche control. But I noticed a group of people standing by the control rope. Something was going to happen, I could feel it. So I said to my brother ‘let’s just wait for a second’. We strap in right as a patrolman scoots past, unties the rope and throws it open!

Drew is there first one to the chair at the bottom. It’s the deepest, most untracked powder I’ve ever had in Utah! In March. On my birthday! I can’t help but think of all those poor suckers standing in the tram!! We timed it perfectly!

It’s the deepest, most untracked powder I’ve ever had in Utah!

So we lap that Mineral Basin zone until it gets too crowded. Head to the top weighing up our options. As we get off the lift, we notice a group of people standing at the avalanche control gates for the front bowl, ‘Pipeline Bowl’. Way off in the distance you can see patrol bombing it. By now we know the trick! We strap in right at the rope and wait. 45 freezing cold minutes go by. There’s 4 people in front of us, and probably 200 behind! Every time a ski patrol comes past with more ammunition everyone starts screaming in excitement. Finally, it’s go time! The rope drops and it’s a 200 person Chinese downhill fueled by a season of no snow on the best powder day of the year on a narrow slightly uphill traverse! It is total chaos!

Skiers are screaming at me, I’m using all the Chumpy Pullin bordercross techniques I can think of to hold my line. I’ve lost all my riding buddies but it doesn’t matter, I drop into Pipeline Bowl and get my 3rd waist deep first tracks for the day!

After a few laps of that, we move on. Drew and I climb down into the ‘Get Serious’ chutes and have some great high speed blower turns right under the chair. It’s too much! This has been the day of days and it’s time to celebrate in the rooftop spa at The Cliff Lodge. 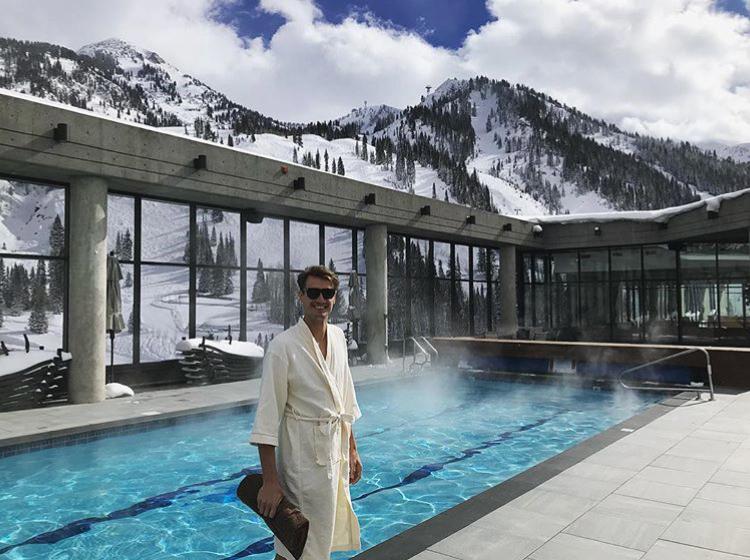 My first trip to Utah was almost 20 years ago. It was with Trigger Brother family member’s Shane Carter, Ralph Rottura, Chris Boadle, Jamo, Ian Cochrane, Kieran Dunlevy and my entire family. I’ve traveled the world snowboarding since and we all have a mantra we say to ourselves when the snow is good elsewhere… ‘It’s good, but it’s not as good as Utah!’.