Did you know! An eleven year old girl was the first snowboarder? 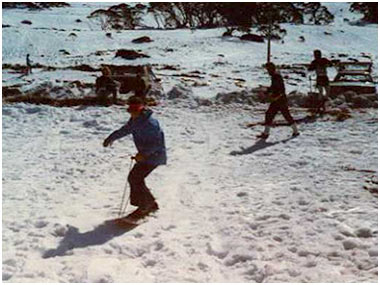 There is no doubting Jeff Sawyer pioneered Australian snowboarding, but for a sport that would appear to be male dominated Torah Bright has eclipsed the field both in competition results and financial rewards. Believe it or not, girls have played an important role in snowboarding right from the start.

Recently on a trip up to Mt Hotham with Gail Couper a surfing legend from the ‘60s we discovered a small piece of history in the form of a Sims Snowboard hanging from the rafters of the Omeo Ski Hire Service Station. Surprisingly at the register was its owner, Billy Kelly, a local Omeo girl who had traveled the ski resorts of North America competing in mogul races and ski instructing to pay the bills. Her Sims “Switchblade” was of particular interest to me as a request from two of the best skaters on the Peninsula, Enzo Verga and Paul Templer was the catalyst for the Trigger Bros crew to purchase a few Sims switchblades and get well and truly hooked on snowboarding. 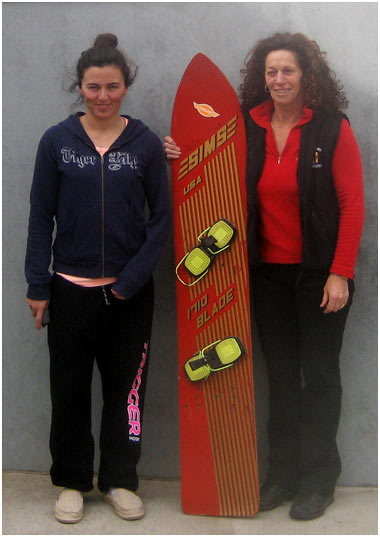 Always one for adventure, Billie took her first glide on a snowboard during the ‘84/85 season at Breckenridge, USA. She was so impressed that the Sims snowboard now displayed was purchased with her last few dollars. Little did she know that snowboards were not permitted on any lifts back in the Victorian ski resorts.

Gary “Spurter” Wall who was one of Hotham’s earliest snowboarders recalls Billie as being the first person with a professionally produced snowboard to ride regularly on the slopes while he and fellow enthusiast Scotty Abbott made their own craft from five ply with a progression to an attached metal edge after a season of slipping and sliding.

Those of us who can remember the struggle it was to be accepted by the skiing fraternity should acknowledge the great contribution Billie has made when she became the first snowboarder in Victoria officially allowed to ride the lifts. As a ski instructor she was shown no favours, in fact, to the contrary she received comments along the lines of “I hope you break you bloody leg” from some high placed mountain officials. By late season 1987 Billie’s persistence paid off with the lift company allowing a two week trial.

Thanks to Billie, Spurter, Scottie, Pav, Gavin Crawford plus obviously a few others we have today a very healthy snowboarding environment up at Hotham. In fact ski patrol believe snowboarding now contributes to around 50% of the list ticket sales per season.

On returning to the coast, Gail promised to forward her own short story on snowboarding in the early ‘80s Click the images to check out Gail’s Burton Backhill and notice the original box the board came in has “Left foot forward” written on it.  How’s that for a custom. 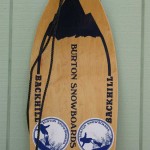 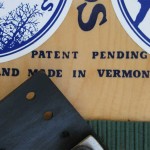 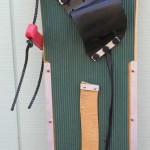 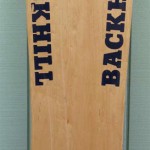 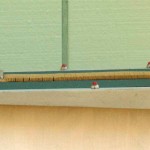 From my reading of Burton’s history it seems that Jake Burton Carpenter tried out a Snurfer as a teenager but when he started making his own boards they were not called Snurfers – but rather Backhill boards. I think the model that I have was made from 1980 to 1984 and then design changes were made. We really needed some powder snow and a steeper hill to actually find out what the board could do.
Anyway the people who tried out the Backhill in 1982 were Myself, Geoffrey, Robbie Dalziel and Mike Anderson.

I have been sorting through dates and it seems that I probably had a couple of weekends skiing at Falls in 1979 and then went more often from 1981 onwards. During the seventies our family would holiday at Tathra and Jindabyne every Christmas as Dad was a keen fly fisherman and it got him out of Lorne during the busiest period of the year. Every second year during that decade I traveled to USA to surf (christmas holiday time) and would go to Jindabyne in the alternate years. Those were the years when I came home with one of the first boogie boards, a soft surfboard, a Bahne short board and enthusiasm for the idea of skiing and trying something like the monoboard -but more like something where you could stand like you do when surfing. That’s where Grant Price helped out and ordered two Burton snowboards in 1982.

Like many of the ‘60s surfing crew Gail Couper had observed the early years of snowboarding from 1965 when Sherman Poppen invented the “Snurfer” (luckily the name didn’t stick), a surf on snow board designed for his daughter. It was a simple design well priced at $15-30 and achieved sales of half a million from ‘66-’76. (Google snurfer for a fascinating story.) In 1969 Dimitrye Milovich started making boards under the name Winterstick, while 1977 saw both Jake Burton and Tom Sims producing snowboards. Jake had won a Snurfer competition on his own laminated ply board with bindings and interestingly Poppen acknowledges Jake’s passion as the single key factor in the development of snowboarding as we know it.

From Poppen’s daughter, the first person to ride a snowboard to our own Torah Bright, it’s nice to see that the girls have carved out a fair track in snowboardings short history.

P.S.: Peter Baker and I tried to ride this Avalanche snowboard at Hotham in 1989. It had no sidecut, no flex, weighed a ton and was enough to put me off boarding until I saw Gavin Crawford carve it up on slalom gully in 1990. I was snowboarding the next day and have never skied since. 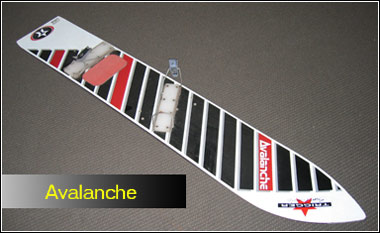 If you have a contribution on this subject please forward.