STAND UP PADDLE BOARD @ PT LEO

The TRIGGER team down at our Pt Leo store are hooked on Stand Up Paddling, and they want you to come down and get involved. TRIGGERBROS co-founder, Phil Trigger  our Research and Development Mastermind, has been SUP’ing everyday since we first got our hands on these things back in 2007. Even our younger team riders Hayden and Angus Forest are SUP’ing on a regular basis.

PT LEO and its surrounding breaks (Crunchies, 2nd Reef, Pines) are perfect for learning to SUP and there are also several breaks for the more advanced (Big Left, Suicide Point).

We have heaps of SUP’s in stock and also a large range of Demo Models. Check out our range of stock models and demo boards available at Point Leo.

Phil’s guide to choosing a SUP.

There are 4 different areas of SUPS.

1.  Beginners basically need something that has the right amount of buoyancy and you’re better off with too much than too little, so you can do it easily. The early boards were 11 foot long and 28” wide by 41/¼” thick which is reasonably narrow compared to what they are now. With the new boards you can get more buoyancy with a board 10’ x 35” x 5”. So now just about anybody who can stand up on the land can find a board that can be stable on the water. Your weight, age, fitness and flexibility all come into it, as well as where you want to progress to in the sport. The secret is not to rush into it, try a few demo’s and do it in calm conditions.

2.  You can ride just about anything in the surf, while the bigger boards catch waves easier once you’ve caught the wave they’re difficult to turn and hard to recover if you make a mistake. If you want to start in the surf, a board must have good nose and tail lift, this reduces the chance of nose diving and the tail lift enables the board to turn better. If you’re 80-90kg a 10’ x 31” x 4¾” board would make it reasonably easy, but if it’s more of a challenge you are after, you could go to 9’6” x 29” x 4¾” so long as you don’t mind spending a lot more time falling off.  We have demos so you can eliminate some of the possibilities.

Learning to ride a SUP in the surf can be easy if you take your time and really think about what you are doing. You should do it in small clean surf at a break where you don’t have to paddle through broken waves. To catch a wave, study the break; most set waves break in the same place. Paddle out wide and as the wave approaches keep your stroke on the same side so you are doing an arc onto the outside of the breaking wave , just before you catch it gentle spread your feet or go into your surf stance, its heaps easier if you have surfed, but it’s all just practise.

3.  Performance surfing requires a lot of dedication and going out in any conditions, the shapes of the boards have been really refined and now look like scaled up versions of short boards. I‘ve attended the National surfing SUPs at Town Beach Port Macquarie the last couple of years and the amount of improvement this year was massive, even though conditions would have to be described as extreme. They had a jet ski in the water all day and ended up doing 13 rescues. One of the open competitors decided to time how long it would take to get sucked down the river climb up the rock wall and then run back along the beach 12min later he was back where he started from. The pictures probably don’t show how difficult the conditions were but you can see how hard these guys go. The top guys are all riding narrow tailed boards from 7’8”-8’6” x 25”-28” around 4” thick.  You can give us a call at Point Leo on 59898402 and I’ll go for a paddle with you. 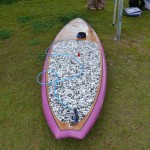 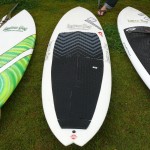 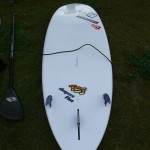 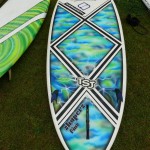 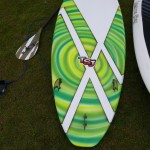 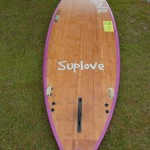 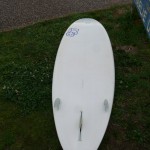 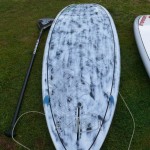 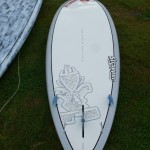 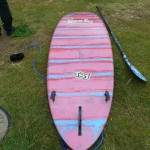 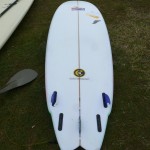 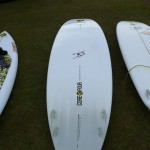 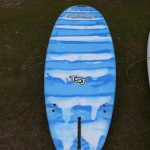 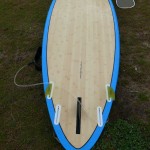 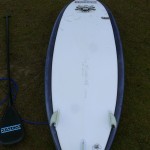 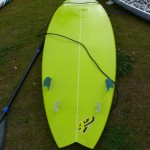 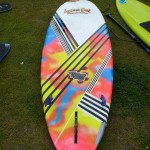 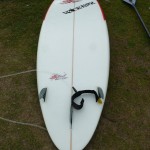 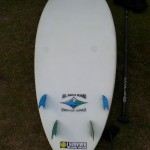 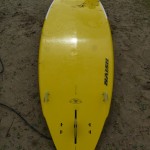 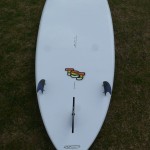 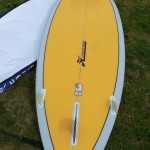 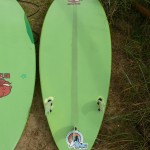 4.  Ocean racing or long distance paddling, these boards are more like 17’ racing skulls very drawn out in the nose and tail but with the deck filled in so you can stand on them, they do a lot of downwind paddling catching swells and being aided by the wind travelling long distances.

So come on down to PT LEO and organise a demo SUP session with Phil Trigger at Pines.

SUP Boards and accessories available from our Frankston and St.Kilda Stores too.