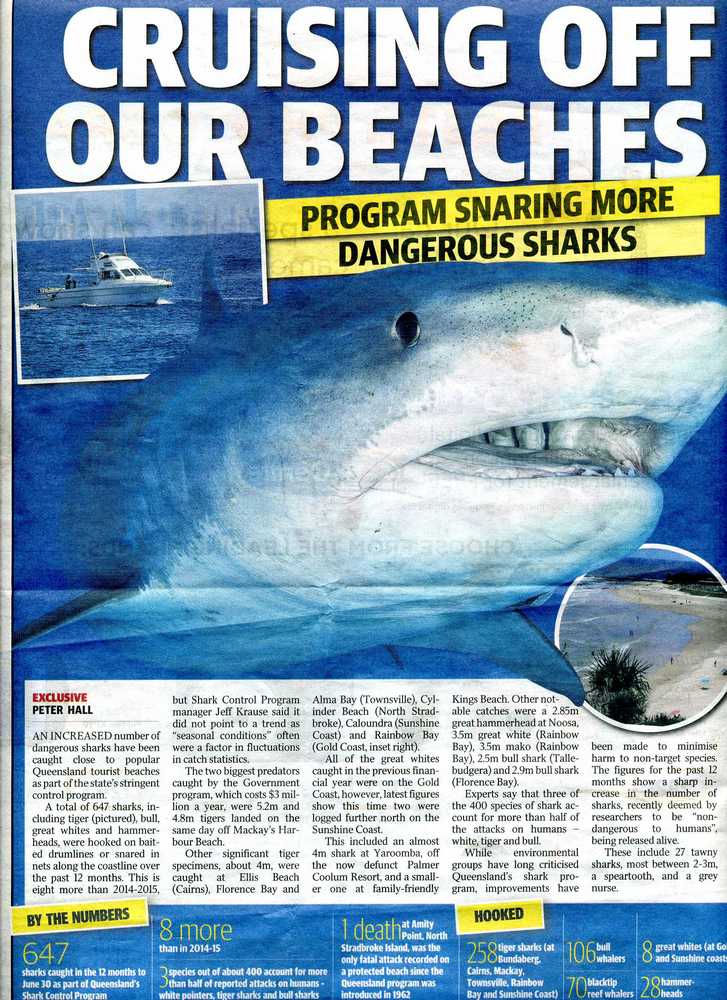 An increased number of dangerous sharks have been caught close to popular Queensland tourist beaches as part of the state’s stringent control program.

A total of 647 sharks, including tiger, bull, great whites and hammerheads, were hooked on baited drumlines or snared in nets along the coastline over the past 12 months. This is eight more than 2014-2015, but Shark Control Program manager Jeff Krause said it did not point to a trend as “seasonal conditions” often were a factor in fluctuations in catch statistics.

The two biggest predators caught by the Government program, which costs $3 million a year, were 5.2m and 4.8m tigers landed on the same day off Mackay’s Harbour Beach.

All of the Great Whites caught in the previous financial year were on the Gold Coast, however, latest figuers show this time two were logged further north on the Sunshine Coast.

Experts say that three of the 400 species of shark account for more than half of the attacks on humans – white, tiger and bull.

While environmental groups have long criticised Queensland’s shark program, improvements have been made to minimise harm to non-target species. The figures show a sharp increase in the number of sharks, recently deemed by researchers to be “non-dangerous to humans”, being released alive.

These include 27 tawny sharks, most between 2-3m, a speartooth, and a grey nurse.

I surfed 2-4ft Lennox in late August between 9 and 11am, it was like being in a fish bowl, thousands of fish that just seem to stay all around you, 8- 10 dolphins continually swimming or surfing waves through the 12 of us that were also trying to catch a few waves. The scene didn’t change the whole time I was out and apparently when the dolphins leave you leave, remarkably it was the same 2 hours earlier when my cousin Tony surfed.

We walked along the beach near the Lennox LSC where they were installing a shark net just beyond the 2ft breaking swell. It was Sunday and there were 3 security people trying to keep people from getting oto close, the cost must have been paid by somebody with too much money. Tony said they had already installed one at North Wall Ballina right in the impact zone much to the delight of the surfers. As predicted they were washed onto the beach in the first swell that came near them.

I since heard the Queensland Government had offered them assistance in setting them up but were refused. The Gold Coast nets are set well beyond the deepest sandbank and are taken out of the water when ever any big swell is forecast.

Since then there have been another couple of attacks and many unrecorded encounters around the Ballina and Lennox areas.

It’s a pity the officials making the decisions don’t spend a bit of time in the water with local crew just to get a real feel for what’s happening.