When Paul and I first started surfing in ‘64, the only wax you could buy was the paraffin wax Coles sold to seal jams and preserve fruit. It was so hard we had to use a candle to melt it onto our boards and that left black carbon marks all over the deck. Sometimes we would soften it in hot water then rub it on, but it never had much grip and you needed a large block to cover a 10ft Okanui. Later we discovered we could buy it at BP Petrol stations.

The best wax we had come across on our trips to QLD between 64 and 68 was Honey Wax which we stocked up on from a Milk Bar directly behind the Greenmount Lifesaving club. Back home we contacted Shell Chemicals and by the time we moved from Bonbeach to our 1st store at 484 Nepean Hwy Chelsea (1972) we were buying 20kg boxes of paraffin wax, 20lt cans of paraffin oil and a beeswax called Ceatak 130. We experimented until we came up with a formula that provided grip, was fairly easy to apply yet not too greasy. Paper cups were used and peeled off once the wax had hardened and then a sticker attached. We used Dad’s old kerosene stove which Peter Wilkinson still has some 47 years later (ideal for camping) and this was replaced by Paul’s double jet gas stove to amp up production. Our formula was written down somewhere but I always managed to remember the exact mix, though in later years some of our staff got it wrong occasionally!

The local young crew which included Ian Cochrane, Pete Baker, Mick and Peter Prouten plus Phil and Geoff Brain were in charge of manufacturing. Cocky still thinks we were ripping him off with the 1 cent a block reward but we were only getting 20 cents and less if we sold it to shops. There was always a lot of accidental spillage up the walls, on the floor and lots of experimenting including dipping your finger into the melted brew 10 times to create a mould then filling it with a batch of resin. An hour or so later peeling the wax off revealed a perfect copy of your finger, prints and all.

By the time we moved to Point Leo in 78 we were selling it to shops all over the Peninsula and even some stores on the West Coast. Packaged in a small plastic cup we called it GRIP. At the 74 Easter Bells we had Cheyne Horan and Simon Anderson both endorsing our product so it was full steam ahead on the twin burner camp stove with 2 old pots making very slow batches of 200. On one occasion we ran out of gas with the brew in half baked so I quickly built a fire in the backyard, ran a couple of steel poles across and we were back in business.

One of the best advocates for our wax was long time friend Jim “Jungles” Howard, who drove from the Bells Beach carpark to his home on the other side of Torquay with no tie-downs just good old Grip wax sticking his favourite surfboard to the roof rack. We met back at Bells on the Sunday morning and he was on loud speaker telling everyone that the Grip wax had saved his board. 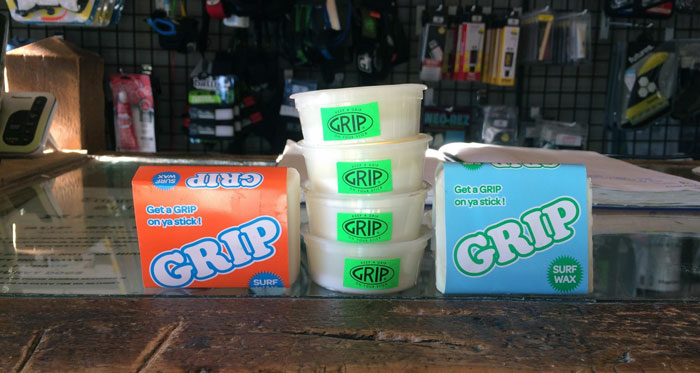 The old and the new!

Due to increased demand for our wax, I came up with the idea of doing things on a bigger scale. By cutting a 44 gal drum in half we could do 1000 blocks a day and store it until we needed to restock. We also began adding different fragrances and by dropping a wax crayon in you could make it any colour you wanted. During the eighties, production saw us purchasing 44 gallon drums of Vaseline and 1 ton of raw wax at a time. Selling and delivering our wax to the West Coast outlets became a hassle and we sold the Formula to fast talking Phil Hergstrom, one of the partners in surf clothing label Beach Crew for the paltry sum of $200.

In 1987 Mad Wax the surf movie was released featuring Gary Elkerton, Tom Carroll and Ross Clarke Jones the hero, who had a magic formula that when applied to the surfboard can place the surfer at any beach in the world of his choice. The video had massive sales and so impressed was Matt Trigger that he replicated the triangular mould, followed the story line but never seemed to leave Pt Leo. I later thought that perhaps he was where he wanted to go.

After 20 years or so we just seemed to let the wax production slide and began buying it from Glen Delaney and Al Cook. These two friends of ours from Flinders started Palmers Wax (now Far King) in much the same way as we did in the old pots and a camp stove. Their persistence and business smarts saw them become one of the most successful Surf Wax Co’s in the World.