Sunday the 8th of Jan saw the Klemm Bell reunion day which was held at the Williamstown Bowls Club nestled in the picturesque coastal town.

The event the brainchild of Klemm Bell tragic Ken Lewis was a gathering of old surf mates, some serious collectors and many of Victoria’s surfing royalty.

The day was based around a tribute to one of Victoria’s most
prominent board makers, Klemm Bell founded by Terry Klemm and Reg Bell who on the day became the recipients of a new award created by Surfing Victoria which gives recognition to
some of the pioneers of Victorian surfing.

The morning kicked off with a few beers, a registration of over 130
Klemm Bell classics displayed around the walls of the old clubhouse and approximately 300 old blokes and partners and their kids.

Terry and Reg were both Melbourne based and first dabbled in board making in the late 50’s with Terry shaping a balsa board on the
verandah of his mother’s house in Newport. Terry was studying
architecture and Reg an apprentice toolmaker at GMH which was just down the road. A far cry from where they would end up in years to come.

In 1964 the two boys teamed up and Klemm Bell surfboards was born. They worked out of a tin shed in the back yard of Reg’s mother inlaws in Giffard St Williamstown. After 80 boards or more
they quickly outgrew the old tin shed and moved to Yarraville
then onto Spotswood in 1968 where a fire unfortunately destroyed everything they had.

With high demand coming from the eastern bayside suburbs they set up shop on Nepean Hwy in Gardenvale sometime around 1968/69.
This is where they quickly grew to be one of the dominant board makers in Vic. Another small retail shop was spawned in Chelsea,
a strong area for surfers and many Klemm Bell t-shirts and TREADS
were sold and orders taken for new boards, unfortunately it didn’t last but the name of Klemm Bell surfboards was well and truly established.

In order to be closer to the surf the boys opened in Torquay and business continued to boom. By the end of the 70’s they had shaped more than 4000 boards and along with their skateboards it was all falling into place! Longboards, shortboards, fishes, flyers, bonzas the selection was broad and Klemm Bell was a household name.

Success continued until the boys parted in the early eighties with Terry moving to Phillip Island and Reg moving to the Gold Coast and settling down in Tugen.

But the name lives on and today brought together many of their friends and fellow workers. Both Terry and Reg were overwhelmed at
times with the turnout.

Laurie Thompson did a great job as the MC and Murray Walding
and Southside Hodads belted out some groovy tunes.

Many thanks must go to Ken Lewis, Laurie Thompson, Roger Suttclife and his lovely assistant on the door, the Williamstown Bowls Club, Williamstown Historical Society and all others involved.

A special board was presented which was put together by Neil “Choc” Oke depicting the history of KB surfboards with murals, logos and Posters glassed into the board, this board will end up in the Surfworld Museum in Torquay where it will sit proudly showcasing
KB surfboards, true pioneers of Surfing in Victoria and Australia.

West Coast crew also were there in numbers with Bob Smith sporting a wonderful KB collection, Andrew Flinton as well as a few of the Island boys, Mal Gregson Blossom and a few of the lads.

One highlight of the day was a board brought along by local Eastcoast surfer Tony Reid. It was a single flyer 7’2” pintail Klemm Bell shaped by non other than Hawaiian legend Reno Abellira. 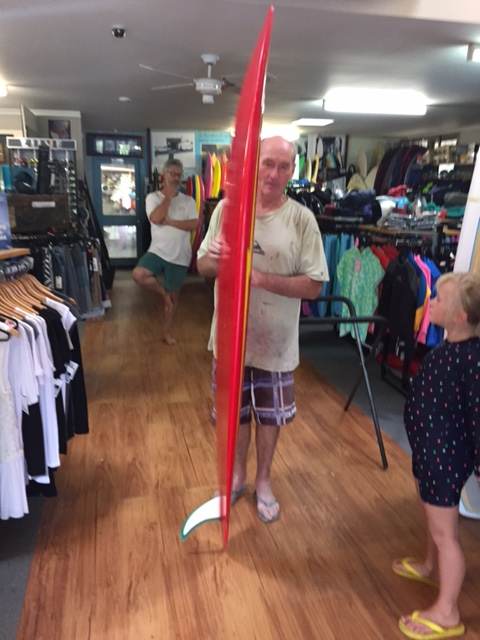 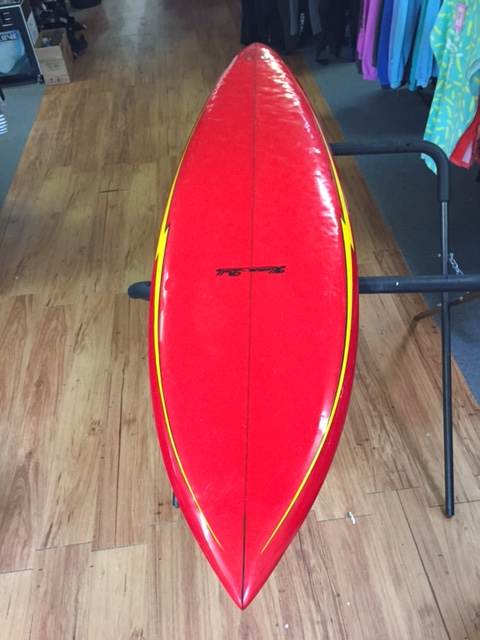 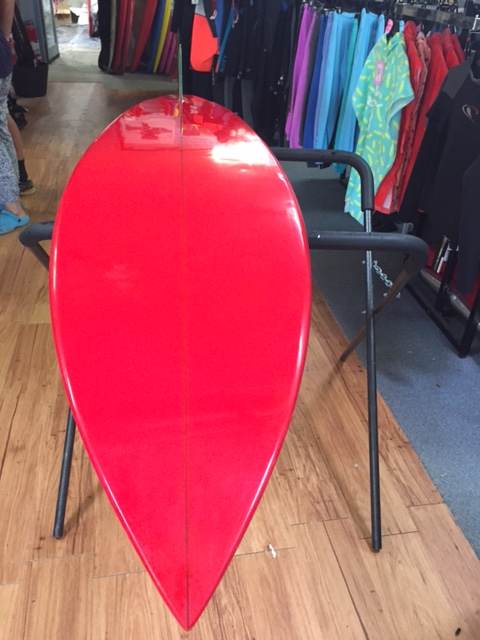 The story goes like this…. In 1977 Reno strolled into KB’s shop and agreed to shape 5 boards to raise some cash, he was there for the Bells contest so this seemed like a good way to raise some well needed funds.
The boards made were glassed by well known shaper glasser and surfer Peter Ashley a fine craftsman from Torquay.(See photo with tony) who was working for KB at that time.

The board was brought into our Point Leo store a couple of weeks ago and Phil Trigger weaved his magic to restore what is a true collectors item. Many offers were made on the day but Tony was reluctant to part with this piece of world surfing history! Some put a value in excess of $2k or more ! Good one for the pool room!!

Many thanks must go to all involved on the day and special mention
again goes to Ken Lewis, Rare surf tees and Surfworld Museum for sharing some information which made this article come to fruition.

A splendid day where many old tales were spun and a few bevos were shared surrounded by some classic Klemm Bell masterpieces. 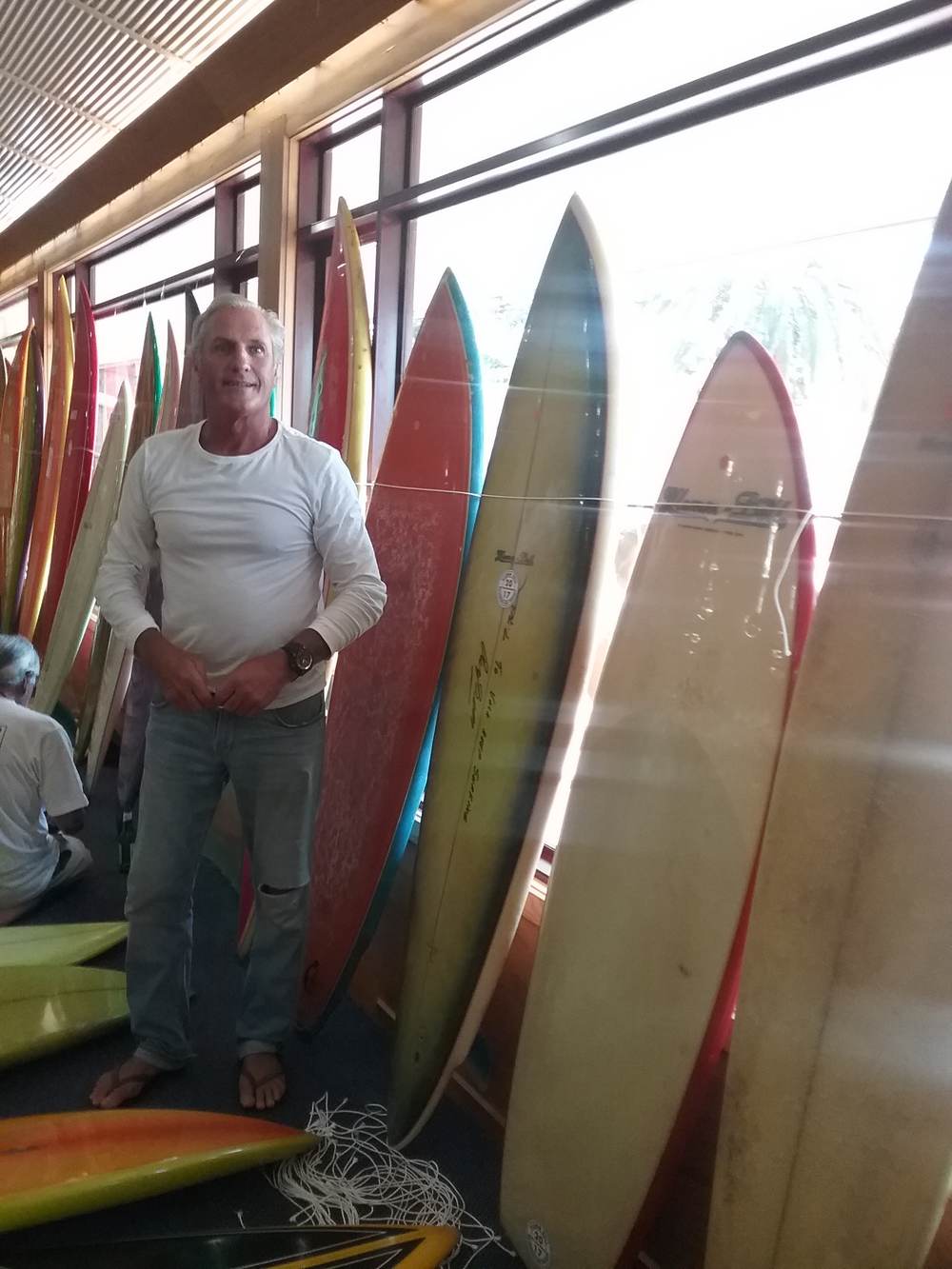 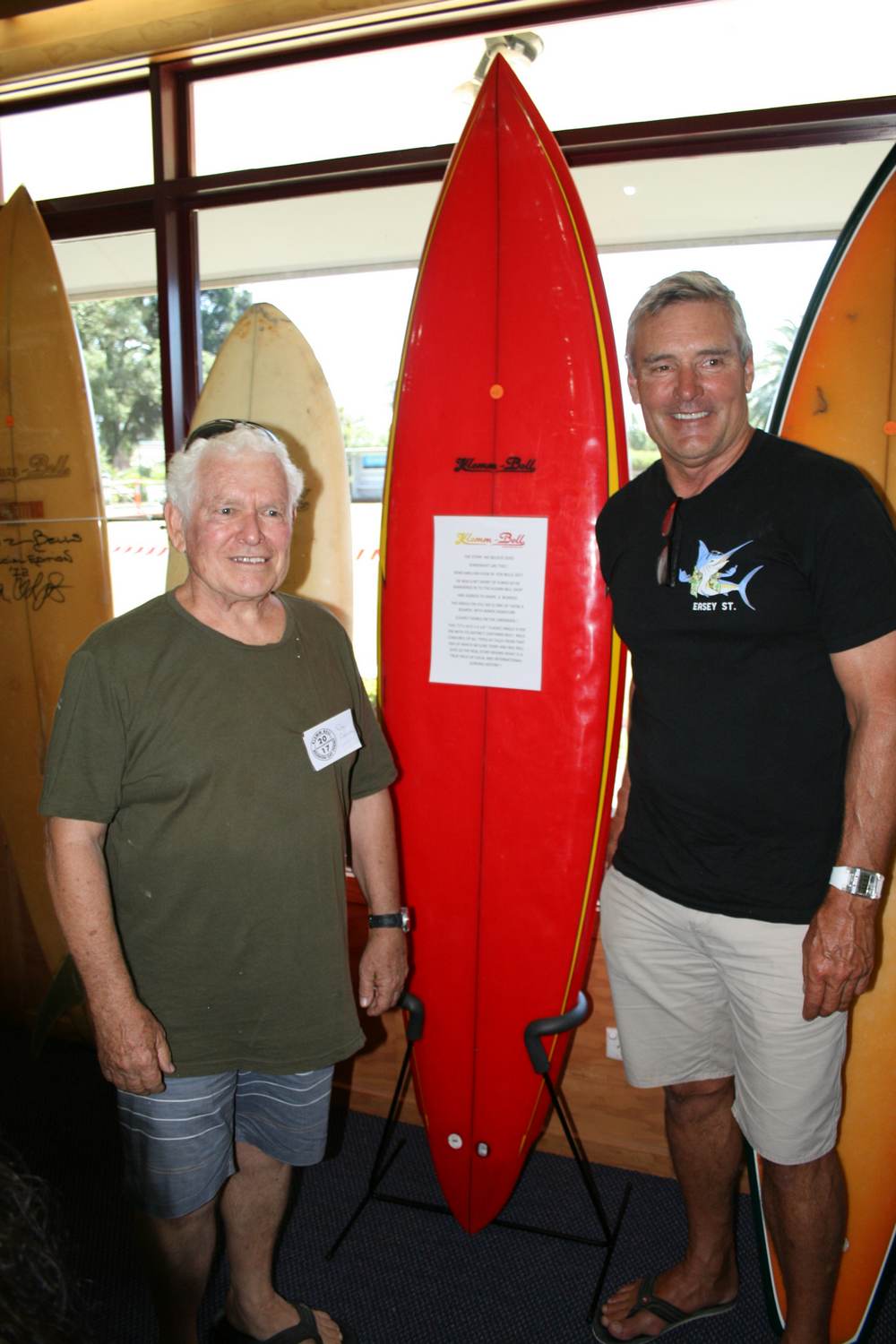 Yours in surfing
Phil Newman T.S.A with Ian lording