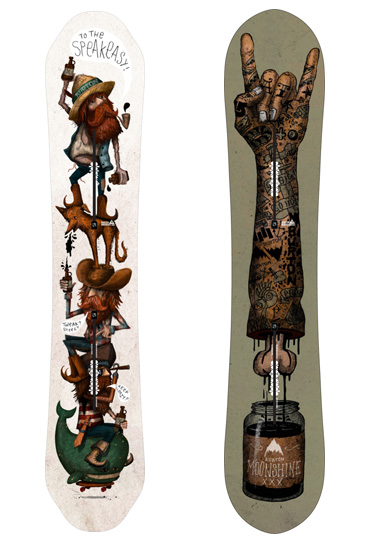 Boarding is an addiction marked by an obsessive need to constantly snowboard and surround one’s self with snowboard-related items. This disorder affects people around the world, and its spread shows no signs of slowing. Boarders can’t help but collect anything and everything to do with snowboarding—from early Burton prototypes, to items like Burton hacky sacks and lunchboxes. Boarders will be more than excited to further their addiction with Burton’s new Backyard Project—a limited run of boards handmade at the Craig Kelly Proto Facility in Burlington, VT.

Usually the scene at the Craig Kelly Proto Facility is pretty low-key and frankly, quite secretive. Busy with one-off protos that the public may never even see, the men and women at Craig’s are generally not too talkative about what they’re building. But when Burton debuted the Backyard Project, limited to 600 boards all made at Craig’s, the crew couldn’t have been more excited. And while artist submissions ranged from magnificent works of gallery-quality art, to solid efforts…only two would make the cut.

Dennis Healy, Burton’s Creative Design Manager, says that, “we were honored to have so many incredibly talented artists submit their work.” He concedes, “I was surprised at the overall quality of the art and people’s dedication to design.”

From a contest orchestrated with the help of Blank You Very Much, increasingly difficult rounds of judging that ranged from internet voting, to a hand-chosen group of shops, and finally Danny Davis and Mark Sollors themselves, two graphics were finally deemed the winners. Both winning graphics actually came from the same artist, English designer, Simon Riviere. The Speak Easy and Moonshine have both been designed with the help of Danny and Mark and feature technology not yet seen in Burton’s regular line.

No stranger to building snowboards, John Laramee—more commonly known as “Thunder”—has worked at both BMC and now Craig’s for close to a decade and has built over 20,000 boards. He says that, “it’s cool for us to go out and see a board that says “Handmade at Craig’s” on it. It’s definitely an honor to be part of that.”

The Moonshine, a mid-wide, comes in a 154cm and 158cm size and features Flying V, Squeezebox, Side Effects and a design driven by Mark Sollors to be a park board that loves powder. The Speak Easy is the brainchild of Danny Davis and comes in a 152cm, 155cm, and 158cm—all mid-wides as well.

The Speak Easy features camber, Squeezbox, an elliptical nose and tail that haven’t been seen since the last un..inc boards, and has been designed as a high-end freestyle board. If you’re a Boarder, then you will want to add one of these limited snowboards to your collection. Lucky for you that we received 5 of the boards, and currently have 2 left at our Prahran store and one left at our Frankston store, if you’re interested in picking up one of these super limited boards call our Frankston store on 9770 223, or our Prahran store on 9521 3800.