SKIMBOARDERS FLY HIGH AT THE WATERFRONT

The Under 15’s division saw Linden Backhausen of Somer’s take out 1st place, skimming well above his age group not to mention Matt Campbell and Matt Turville who impressed the crowd hitting rails and obstacles, placing second and third.

One of the main highlights of the day was the Under 18’s Final, with Noah Hankinson from New Zealand taking out a well-deserved 1st place, landing tricks of high difficulty throughout the day. Closely following in 2nd place was Michael Turville who demonstrated speed and style on the rails, Harry West followed in 3rd place.

Local Frankston Skimboarder Nick Haynes debuted in the OPEN division this year, claiming 1st place landing super clean tricks including a huge backside big-spin off the kicker in the dying moments of the final. Matt Peters took out 2nd place, powering through despite major cramps in his legs, with South Australian Michael Iuliano following in 3rd place.

This event provides an enormous opportunity for skimboarders locally and internationally to showcase their talent, ultimately progressing the sport within Australia.

Event highlights included CJ Hodgson’s ability to gain massive hang time off the kicker in the Under 18’s final, pleasing the crowd repeatedly.  A special mention also goes out to Lucy Cameron who was the only girl to enter the entire competition on the day, taking out the crowd limbo competition for the 2nd year in a row.

All of this wouldn’t be possible without the push of the Victorian Skim Society, Frankston Youth Resource Centre and Fresh Entertainment who all volunteer their time to run these amazing events. A huge thanks goes to Nemo Skimboards who provided trophies, prizes and infrastructure on the day alongside with Trigger Brothers who also supplied great crowd prizes. 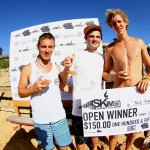 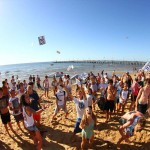 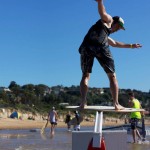 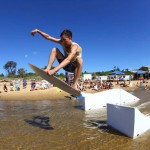